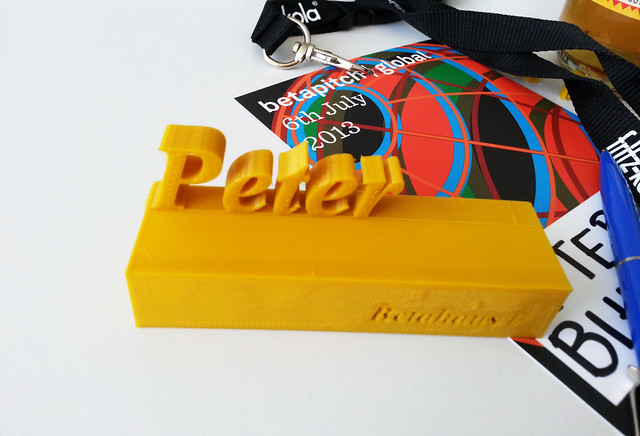 Last night I was on the jury for Betapitch Global where the winners of the local Betapitch winners competed for a nice price bundle including 10K, time in the Silicon Valley or with entrepreneurs and policy makers in Paris, as well as offers to join Telekom’s or Axel Springer’s accelerator programs, and a whole slew of other things. In other words, good stuff.

It’s not easy deciding the winner as the range is just incredible. From earliest days to funded, from app idea to hardware or traffic infrastructure, from first timers to seasoned entrepreneurs – at Betapitch we regularly see the full range.

After seeing 15 startups pitch, we decided to split the price between several promising and ambitious startups, trying to distribute the prices so that the startup teams would get the maximum out of their wins. After all, we’re there to help the startups, that’s what pitch events are for.

Congratulations to the winners

First price went to Statace, an ambitious product that aims to make complex statistical analysis easier to use, more collaborative and more distributed. Might not sound like the most exciting thing, but it’s extremely relevant both for science and for big data analysis.

Congratulations to all the winners, you rock! The teams that didn’t win shouldn’t take this as discouragement. Not everyone can win all the time, and at least one team clearly simply didn’t need any of the prices as they’d outgrown that stage of startup life by the time they pitched.

There were a couple of teams where it became obvious after the pitch that their technology stack might actually be much more solid than transpired in the pitch itself. That’s something that is hard to account for – as jury, we get a brief paper outlining the service before the pitch. And while the pitch itself is what counts, if in doubt we will refer to the paper to figure out what’s under the hood. If technology (not design, idea or your network) is the core of your USP, you’ll need to find a way to make sure you can convince the people in the room that you know your stuff.

One thing that was pointed out by Thomas Madsen-Mygdal found broad support in the jury (if not so much in the audience, it seemed): Founders focusing to much on their home market, in this case Germany or the German-speaking countries. Thomas calls it the “German disease”. Unless the service is for whatever reason focused exclusively on the German-speaking market, this is almost certainly a dead end. By the time you reach critical mass and market validation there, clones will pop up everywhere. Founders, go global from day 1! Don’t make yourself small and aim too low! Chances are your service will still grow more quickly at home then abroad, just don’t artifically restrict it to that market.

Of course, as so often is the participants might get even more value out of the hallway conversations on the side, over drinks and BBQ, than out of the actual pitch. This is where contacts and war stories are swapped and collaborations are explored informally. So if there’s one tipp I’d give you is don’t run off after the pitches are over. Rather, stick around for a bit, and chat with the other folks around. They’re all there to meet new people just like yourself.