So, Instragram announced updates to their Terms of Services. Nothing unusual about it, really, only that the updates seem to be aimed at monetizing by allowing advertisers to use your photos without prior notice or consent (besides agreeing to the ToS, obviously).

Now, often times ToS changes trigger all kinds of resentment by the user base, and in many cases it’s a matter of legalese or bad communications. Say, if a service requires consent to copying and distributing your content: Copying and distributing can easily sound like selling or licensing or doing other weird things with your data, while it might just be necessary to run the service you signed up for. After all, you can’t store a digital image without making copies of it. That kinda thing.

That said, Instagram’s new ToS seem to be more directly aimed at advertisers, and as such it’s a different game altogether. Furthermore, they’re now part of Facebook, and as such – in my eyes – much less trustworthy than a year ago. Facebook has a horrible track record of abusing users’ trust, for example by changing default privacy settings and making it unnecessarily hard to opt out of new features. So personally I’m not willing to give Instagram/Facebook the benefit of the doubt on this one.

But enough with the rant. The Instagram ToS kerfuffle was as good an excuse as any to eventually try out Recollect, a service run by good former Flickr engineers, who sources closer to the matter tell me are good, trustworthy folks. Moreover, they’re building a service that charges users upfront, which seems to be to be a good model of building sustainable businesses.

So what does Recollect do? Simple – it backs up data from your social media accounts. I just had Recollect gather my Tweets, Instagram and Flickr photos as well as Foursquare check-ins. You can then proceed to download them to your local machine. (In the case of Instagram, it saves everything as HTML, so you get to keep not just your photos, but faves, comments, etc.) It’s simple, and a useful thing to do if you think that archiving your data is useful at all. 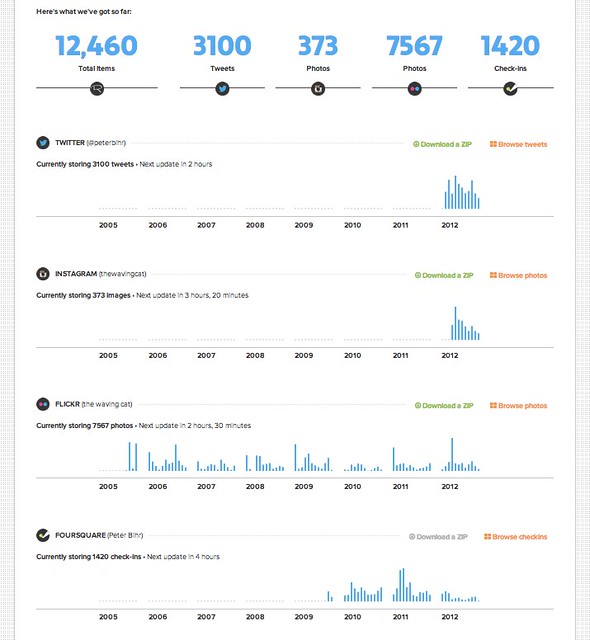 Screenshot of the Recollect dashboard. Note the activity on the different services, and how they changed over time.

A nice side effect: The dashboard shows you your activity on these other services. In my case, as you can see in the screenshot, I saved more than 12.000 items, including 7.500+ Flickr photos and about 1.500 Foursquare check-ins.

I won’t be losing much Instagram: Since the Android app only came out this year, I have less than 400 photos there, it’s really a minor problem. (I also had them automatically cross-posted to Flickr anyway.) It’s just a bit of a bummer that Twitter introduced an API limit awhile ago, allowing only about the last 3.000 tweets to be accessed – so for me that means I’m about six years short on Twitter archives. Which is pretty bad, and another reason to back up data there as it passes through.

I’ve only been testing Recollect for a single day yet, but I’m pretty sure I’ll keep using it and will be happy to pay the monthly fee for a reliable backup and the option to export my data whenever I choose. Recommended!