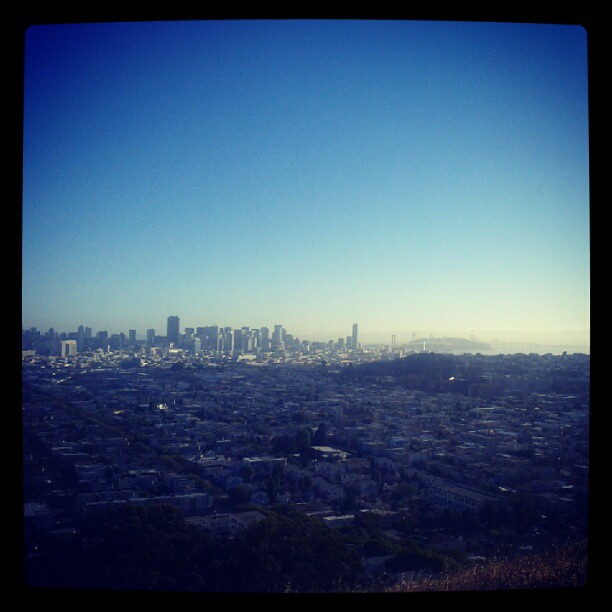 Yesterday evening, while the plane was slowly rolling towards the gate of SFO, two kids sitting behind me started humming the Imperial march from Star Wars. A worthy way to arrive if there is any, and along with Urbanvention founder Benjamin Mateev I shared a ride downtown. We had bumped into each other at Munich airport, and judging by what I’m hearing on the backchannels we’re just a small part of a large Berlin contingency that’ll get to the Bay Area over the next couple of weeks: Apple’s WWDC is around the corner and attracts plenty of visitors from all over the place.

I’m neither a developer nor in town for Apple, instead I’ll head over to Sebastopol on Friday to spend the weekend at Foo Camp. As you can imagine, I’m psyched! (Also, intimitated just a little. It’s a killer crowd.)

So I was lucky, it seems my body ended up in the right time zone right away. I’m making sure to keep it there, with an early morning run and some fantastic coffee at Ritual, and catch up on the work I missed due to a full day of travel.

Getting into San Francisco last night, and spending a few days here, one thing became blatantly obvious to me. It’s something I’ve known deep down for awhile, but this trip surfaces it: Just like New York, San Francisco is one of the cities I’ll have to spend some time at. As in actually living there. Could be a few weeks, a few months, a few years. But it clicks more than many other towns. No wonder, it’s one of the cities where our tribe lives, and there’s likeminded folks galore.

I’ve worked for a few weeks at a time from different places in the past, and even as a freelancer that worked remarkably well, given that you’re open about it with your clients and they trust you can be reached. In my case that meant the occasional awkwardly times Skype call to make it easy for my client’s time zone, but that was always more than worth it. I imagine it to be a bit different working in a team, but I’m curious to learn how to make this work. I know many people that have successfully done that, and some where it turned somewhat sour, but I’m sure it can be worked out given the right kind of prep. So if you’ve done this, let me know what worked & didn’t work. It’s not an urgent thing, but one I’m constantly interested in.

But for now I’m just going to enjoy the time in the Bay Area, meeting lots of people. Speaking of which – if you want to meet up, ping me via Twitter or email.