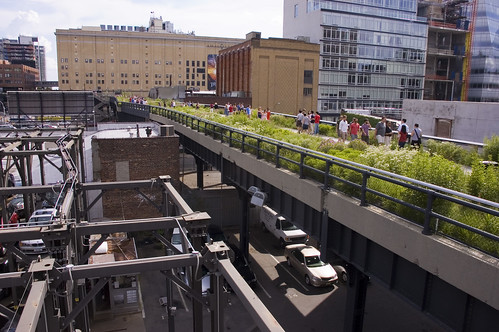 Sadly I wasn’t in town for the opening of the High Line Park in New York. It opened right after I left. Still, redefining those old rail tracks as a park seems like a tremendous idea, and like a great way to evolve a city over time.

As it says on the High Line blog:

City officials have predicted that development sparked by the High Line as a public park will bring $4 billion in private investment and $900 million in revenues to the city over the next 30 years. “Measuring the Economic Value of a City Park System,” a report released by the Center for City Park Excellence at the Trust for Public Land, found that ”numerous studies have shown that the more webs of human relationships a neighborhood has, the stronger, safer and more successful it is.” Good parks assist communities in creating viable human relationships, which in turn lead to stronger and more cohesive neighborhoods. This can “reduce a city’s cost for policing, fire protection and criminal justice.” Good public space is an imperative part of a good city, but in order to yield positive results, cities must invest in their parks.

It’s not just the financial gains for the city. In fact, I’d claim that this is just a minor aspect. More important is the social difference that a park can make as a community space. And yes, that may need investment.

Living in Berlin, and preferably in or around Kreuzberg, the next park from my apartment is Görlitzer Park (Wikipedia), a park on the grounds of a former train station. Görlitzer Park is incredibly popular in Kreuzberg (as is every park in a big city), despite it’s pity state.

Besides nice Café Edelweiss, there’s a derelict fountain, a barbecue area and a hole in the ground where students and other Kreuzbergers hang out, affectionately called The Crater. (It’s a crater left over from blowing up the ruins of the former trainstation there, parts of which still are visible.) The grass is rarely green in summer since it doesn’t get watered. Usually it’s mostly brown dust and hardly grass at all. It is, all in all, in a bit of a sad state. (And it speaks for the Berlin crowd that they still make it such an enjoyable place.)

Back to the point: Parks are important for a city. Berlin’s parks are partly well maintained, partly sadly neglected. Berlin’s broke, and has been for a long time. Still, the city should take much, much better care of parks like Görlitzer Park. At least water the grass. Pretty please?

Great post, Peter! Since you missed the opening of the High Line, check-out bit.ly/RefreshEverything. You can take a virtual tour, watch videos, view photos, and a ton more..