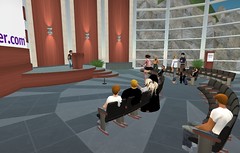 Christopher Penn describes a heavily mashed-up impromptu unconference that took place in Second Life – spontaneously agreed on via a wild mix of Twitter, IRC, Second Life, you name it:

As tastyblogsnack‘s Justine saw it:

I noticed a few messages between Chris Penn and Britney Mason who were meeting on Jeff Pulverâ€™s island, Pulveria. Within minutes, a â€œd textâ€ to financialaidpodcast for his SL name, and I was off to meet Britneyâ€™s beautiful avatar and a Jedi Penn. Chris Brogan was even there with the most amazing pair of pants Iâ€™ve ever seen. Shortly after, I posted a twitter message and mentioned in the #twitter IRC channel of the random meetup. Chris Pirillo joined us and also sent out a tweet to his loyal followers, all while trying to escape from a teleport into a plant. Within a 15 minute time-span, there was an improptu audience of a few dozen people. The internet is beautiful.