As is the tradition with this end-of-year post, it’s part work, part personal. Enjoy.

Last year I described 2014 as “a year of building foundations. Much more than ever before did I focus on creating a stable basis for future things rather than pushing ahead first.”

This couldn’t have held more true: 2015 was for building things on top of those foundations, for growth and new collaborations.

My work this year has also been totally and entirely dominated by the theme of connectedness: Internet of things, connected cities / homes / services.

The company has had a fantastic year, all the IoT & hardware efforts have led to another round of ThingsCon as well as a lot of work around IoT, connected services & smart cities – with engagements including corporate and government work, speaking, curating, R&D, business and product strategy work, and much more. Also, a rather large amount of self-initiated projects including an essay-collection-turned-ebook and more.

Personally I’ve very much enjoyed that I could focus my work a lot not just on #IoT, but particularly on the aspect of user rights and value: The ethical aspects of unconditionally putting users first and the positive impact this has on a business. Championing user rights is something I’ve always done where I could, and it’s slowly but surely become a core aspect of my work – needless to say I’m thrilled, and starting to put this front and center in the messaging of my service offerings, too.

All good & healthy here, and I’m very grateful for it. Some babies, some weddings; also a first divorce. All in, a very good year.

24 trips to 9 countries making for a total of 147 days – that’s close to 5 months in other places. It’s not all business travel though, at least not the exhausting type of business travel: It includes a few weeks spent in Portland, as well as a long vacation. This year there was a fair bit of domestic travel for work, but I also got to go to the UK and the Netherlands, to Costa Rica and the US, to Australia and New Zealand, to Poland and Belgium and Italy. In 2015 I eventually got better about combining work trips with added free time to explore – something I’m most certainly going to keep doing. 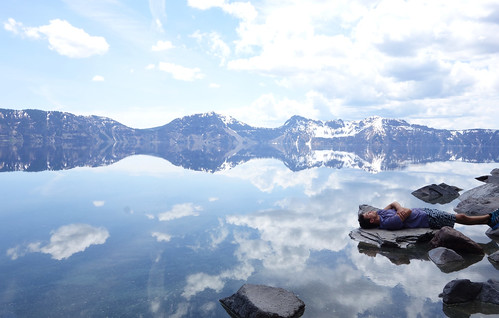 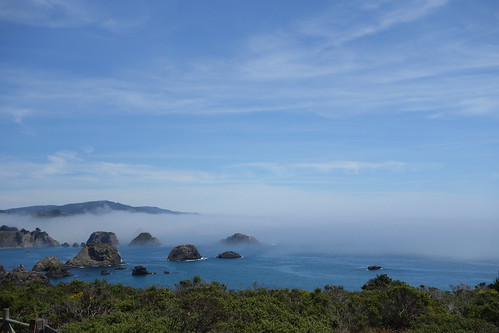 Road trip from Portland to San Francisco down Highway 1 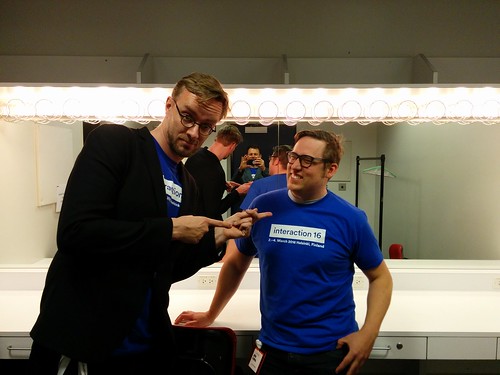 Sami & Otto backstage in San Francisco right before we announced to be hosting Interaction16 in Helsinki. 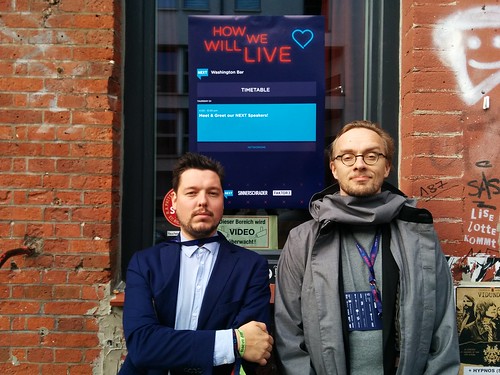 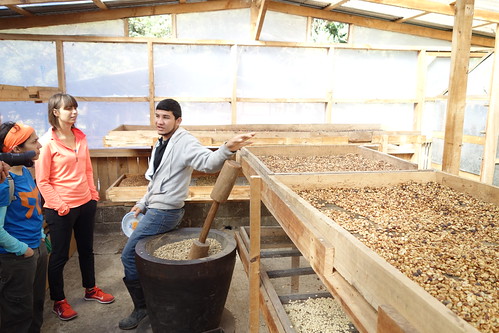 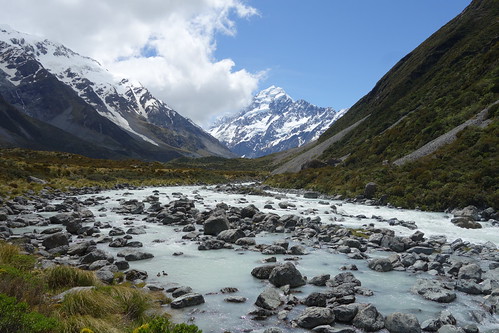 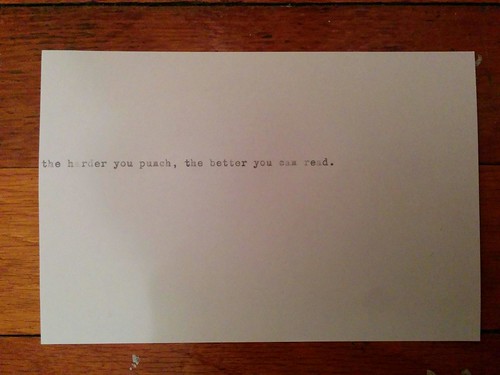 Having fun with Leah Hunter’s mechanical typewriter at Foo Camp

One trip worth mentioning separately is our visit to Casa Jasmina: Michelle, Alexandra and I stayed at the Casa (I believe as the first official guests, even) and got to spend a lot of time discussing the idea and the issues of connected homes with our hosts Bruce Sterling, Jasmina Tesanovic, Lorenzo Romagnoli, and the local community. Rarely has a short trip like this lead to so many conversations and triggered so many thoughts for me.

I’m not exaggerating: Almost every day since some train of thought comes up that I can trace back directly to our conversations there; It lead to M & I publishing a collection of essays as an ebook (Understanding the Connected Home); And triggered what would later become Alexandra and I taking a stab at designing a home for the 21st century and bringing it to the Milan Design Fair (TheGoodHome.org)

For some more detailed reading I wrote up the whole trip here. 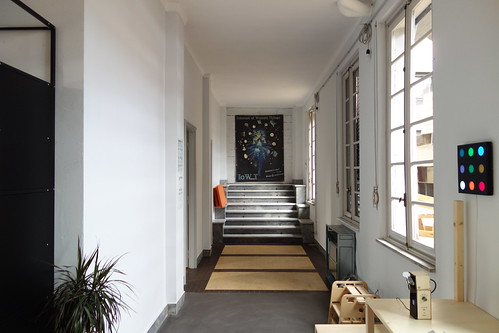 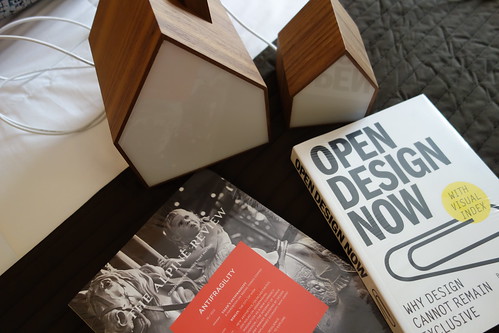 Gifts for the Casa Jasmina library (of books and connected things): A family of Good Night Lamps, Open Design Now, The Alpine Review

We moved into a brand new office at Aufbauhaus, which I’ve been sharing with Alper and Will, and more recently also Yasmina, and of course our lovely neighbors Syspons. 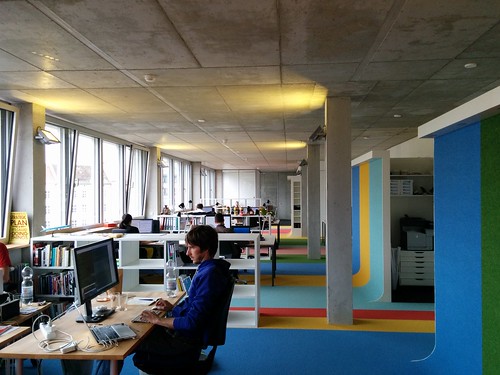 New office at Moritzplatz inside Aufbauhaus.

Got to work very closely with some good friends like Alexandra DS, Sami Niemelä, and Wolfgang Macht on new and continued collaborations, which I enjoyed a great deal.

Launched Dearsouvenir as a magazine: Half a step removed from my other day-to-day work, but all the more exciting, I co-launched Dearsouvenir with Wolfgang Macht (Netzpiloten) and Carry-On Publishing as a travel magazine that explores beautiful destinations through the vehicle of the humble souvenir. 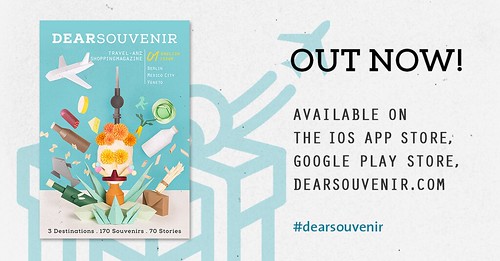 We also had another Ignite Berlin after a short hiatus last year. W00t!

Firsts & some things I learned along the way.

Got the e-residency of another state, concretely I became an e-resident of Estonia. The fact that this is possible, and hassle-free, and a state making you feel welcome all was so mind-blowing that it really made me think a lot about just how badly Germany handles these things on just about any level. Thanks Estonia, this is brilliant!

More than ever, 2015 made me realize how much I enjoy working in collaboration with smart and dedicated friends (thank you!), and how much more I want to emphasize and pursue this kind of work in the future.

We prototyped a first installment of A la Card, a new fun salon-style event format where we pair dinner courses with games.

Things & topics currently on my mind

2015 was a little calmer than 2014 in terms of conferences – no hard feat given that in 2014, I ran three conferences back to back over the course of just a few days.

This year it was mostly ThingsCon as well as NEXT and a bit of planning support for a Bosch event for 2016, plus of course ramping up to co-chairing Interaction16 in Helsinki.

Also, I participated or spoke or ran workshops at a few very nice events including Mozfest, FooCamp, SolidCon, the 10th anniversary of Creative Commons Poland, as well as a IoT Turin meetup. It was mostly about connected homes and hardware/IoT.

Not that much speaking this year, but I did write a few contributions to magazines and the like. We published Connected mag (now on hold).

And I wrote – but I believe it’s still unpublished – a government report on smart cities and how to draft policy around the topic with citizens (rather than vendors) in mind.

2016 is all about growing and fostering all the collaborations and engagements that launched in 2015.

Concretely, ThingsCon and Dearsouvenir Magazine both have the potential to evolve into something bigger. The essay collection Understanding the Connected Home has turned out to be a great place to focus our thinking around connected homes, so more thinking & writing is in order. Transferring this thinking into action, our design draft of a home for the 21st century, The Good Home, could be massive and is certain to be interesting for a while to come. Also, the technical/performance wear field has organically been drawing a lot of attention in my day to day – usually a good indicator of where I might start poking around and experiment a bit.

So it looks like 2016 will be an exciting year indeed.

But for now, relax and enjoy the holidays!