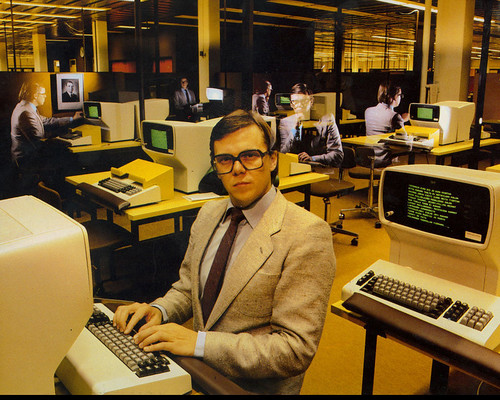 A couple of days ago I’ve given a short look back at the year 2009 from a personal point of view. Right after, I realized there were a couple more things with a wider tech perspective that I’d like to include – again, more for personal documentation than anything else. So here goes.

Everything went to the cloud We had been talking about cloud computing for a few years, but for me, 2009 clearly was the year The Cloud took off. I moved practically everything to the cloud, and cloud often equals Google these days. My email has been living inside gMail for years, but in 2009 I’ve ditched my email client altogether. Now I’m IMAP-ing browser-based between my computers and my phone.

Everything but my most sensitive documents live in the cloud, especially most collaborative docs. (Again, Google Docs or Etherpad, but Etherpad has also been acquired by Google recently.) My calendars are 100% up in Google Calendar.

Am I happy about this focus on Google? Far from it. But at this point, I see no equally well-executed alternative. For an overview of just how googley 2009 was, head over to Gina Trapani. Also, I recommend This Week In Google, a great weekly podcast with Leo Laporte, Jeff Jarvis and, again, Gina Trapani.

Still all this is clearly just the beginning. It should be interesting to watch where cloud computing goes in 2010.

Android killed the iPhone (for me) Ok, ok, Android may not have killed the iPhone officially. But ever since I switched to an Android-based phone (HTC Hero), I haven’t felt the urge to get an iPhone. Not a single time. Before I had been playing with the idea, and had always restrained. (I really don’t like the product policy behond the iPhone.) Android is a gorgeous, stable, powerful platform, and it’s all open source. It’s clear to me that while I might change phones a few times over the next couple of years, it’s not likely I’ll be leaving Android anytime soon.

Speaking of open source, 2009 is also the year I ditched Windows for good. I now live a Windows-free live (with a mix of Mac OSX, Ubuntu and Android), and boy, it’s feeling good.

The fight for our data 2009 has also been a year of intense battles in the digital realm, although certainly it’s not the last (or worst) to come. These fights have been along many different fronts, and not all have been going well at all.

In politics, Europe has been covered in conflicts regarding data retention. (German government introduced excessive data retention laws which are now under court review as far as I know.) Also in Germany, the basis for government-run censorship was laid under the pretense of fighting child abuse, search for #zensursula for details. The best German-language resource for these topics is certainly netzpolitik.org, so check them out for more details and updates. Good news, if not a solution to the problem: President Köhler has so far refused to sign the law.

In the corporate world, the conflict lines have been a lot more fragmented and twisted. However, one thing has become clear: Internet consumers will have to make a clear point regarding their expectations in terms of privacy and data control in digital contexts. Be it Facebook and its privacy settings, be it data ownership in other social networks. Important keywords in this field are: Data Portability identification systems like OAuth, microformats or the decentralized social web. (Like so often, Chris Messina is right in the middle of it. Check out the DiSo Project.) The same goes for End User License Agreements (EULA for short). Everybody is so used to just clicking those pages upon pages of legalese away that we’re bound to have a discussion about their use and legitimacy sometime soon. This isn’t new, but hasn’t been solved either, so maybe 2010 will bring some news there.

But worry not, it’s not all lost – these topics seemed to be very niche, and maybe still are. However, everybody in their right mind will come to the conclusion that there’s a line to what consumers have to bear before just moving on to another brand or product. (Even my mom was asking about the insanity of DRM the other day!) It looks like these topics, obscure as they may seem, are getting more publicity and more people to help out. Hopefully we can all collaboratively take some of the load off of the few individuals that have been doing such a tremendous job of raising awareness so far. (You know who you are.)

Obviously I’m happy to be able to end this post on a happy note.

So, again in short: the tech year of 2009 the way I perceived it = year of privacy discussions, cloud computing, Android.

Did I forget anything important? Let me know…