Over the last couple of weeks I could see the production blog of Same Same But Different – The Movie take shape in our offices. The Same Same blog has been online for a about a week now. (Full disclosure: The website is produced by Panorama3000 who I share office space with. I’m not involved in the project in any other way, and I wasn’t asked to write about it.) What struck me as remarkable when webdesigner and flasher Patrick showed me the site was how intensely the movie crew uses all the different channels and services. 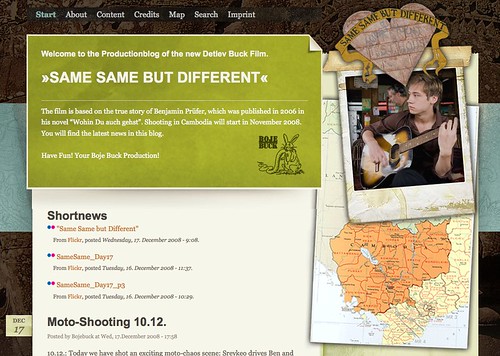 Screenshot of the Same Same But Different Production Blog

Straight from their shooting locations (Cambodia, Thailand, Laos) they blog, shoot movies (duh) and put them on Vimeo, post photos to Flickr. Google Maps shows where the action is, and also shows all the posts about a certain town. All this stuff is aggregated and fed back into the site through Friendfeed.

That kind of integration isn’t particularly new in terms of technology, but it’s cool to see those tools being adopted so quickly and thoroughly by the crew on location. If they keep it up (which of course is hard to tell after just one week), it should be pretty cool to watch. Then it wouldn’t be the usual half-assed last minute marketing stunt to get some more people to watch the movie. The blog and all the surrounding services would be a complete documentary of the production process. This leads to a whole new level of transparency which I hope and believe we’ll see more and more of in the next few years.

Why is that cool? Except for being generally curious about how stuff works I’d guess there’s plenty of creative folks out there who could do all kinds of interesting stuff with this kind of material. Which brings me to the one thing I hope the producers will change: Could you guys release the blog, the movie clips and the photos under Creative Commons please?