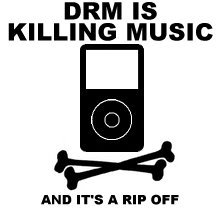 Apple and EMI announced that the whole EMI catalog will be sold through the iTunes music store DRM-free:

Higher-quality music files, which will play on any computer and any digital-audio player, will not replace the copy-protected EMI music currently sold through iTunes. Rather, they will complement the standard 99-cent iTunes downloads and will be sold at a premium: $1.29 per song. Consumers who have already purchased EMI tracks containing Apple’s FairPlay copy protection will be able to upgrade them to the premium version for 30 cents, EMI said. Full albums in DRM-free form can be bought at the same price as standard iTunes albums. “We are committed to embracing change, and to developing products and services that consumers really want to buy,” said Eric Nicoli, chief executive of EMI. Nicoli cited internal EMI tests in which higher-quality, DRM-free songs outsold its lower-quality, copy-protected counterparts 10-to-1.

This is awesome news! Now you can get better-quality music, and without the copy protection you can actually use it on any device you’ve got. (It’s 30% extra per song, but that’s a price I’m more than willing to pay for actually owning the music instead of just being granted the temporary right to listen to it, under certain circumstances, if Apple happens to be in the right mood. So to speak.) Also, independent labels should profit extra from this price structure, as their songs usually were sold for less than the regular 99 cent.

Apple’s Steve Jobs had talked about selling no-DRM music, but didn’t seem to be acting on his workds, so this is really, really great news.