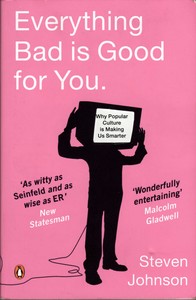 Lately I’ve been getting more and more into how gaming influences us, culture, our media consumption, user interfaces… – you name it. Partly this is because I’ve been involved in some Second Life stuff, partly because of the whole debate about out-lawing so-called “killer games” that had been clogging up German newspapers for quite a while.

(While I’m a bit disappointed by Second Life’s performance, I do think virtual environments are great for educational purposes, among others.)

I just started reading Steven Johnson‘s 2006 book Everything Bad is Good for You. (Remember his book Emergence? Great stuff, too!) The point he’s making through-out the book is that on average, popular culture has grown more complex and intellectually challenging over the last thirty or so years. Particularly, gaming – and of course networked gaming – fosters skills far beyond the clichÃ© hand-eye-coordination: When immersing in such games, players develop their rapid decision-making, prioritizing, and deep analysis skills, among others.

I’m not far enough into the book to really judge it, but what I find interesting is that the thinking about the role games play is changing quickly, going from “waste of time” towards “potentially useful”. (Right now, I’d say it’s somewhere in the vicinity of “not definitively dangerous” – although the German debate mentioned above indicates that this might take some time to sink in.)

In their 2004 book Got Game:How the Gamer Generation Is Reshaping Business Forever, John C. Beck and Mitchell Wade take a similar stance, i.e. that new media have changed economics and cultural production massively, according to Joi Ito:

(…) that “they” (the baby boomer generation the authors represent) are misinterpreting and underestimating the size and impact of the gaming culture. They describe gamers as a newer and bigger generation than the baby boomers and assert that the thing that ties them together is gaming. They explain that gaming is bigger than the commercial Internet and only slightly smaller than TV in its cultural impact.

Apparently, though, what also has changed, is the gaming industry – but towards the opposite direction, and not to the better, from what Joi writes from the Game Developers Conference (GDC):

If you’re in the game industry, you know about GDC. If you’re like me and were never a game industry professional, odds are you didn’t know about it… at least until now. Anyway, having never attended this conference, I decided not to prepare my talk until I arrived and got a good look at my audience. It’s actually a fascinating mashup of the old-school, hacker, anti-establishment gaming culture that I remember and a slick Hollywood-style “buzz” of a multi-billion dollar content industry. (…) The sense that I got yesterday was that the gaming industry was basically the same mass production and mass distribution content industry machine that Hollywood movies and television are. And… while there are certain companies and individuals who are bridging the gap between the gaming industry and the Internet, the gaming industry is making the same mistakes that the content guys have been making since the beginning of networked computers. They ALWAYS over-estimate the importance of the content and vastly underestimate the desire of users/people to communicate with each other and share.

So after the money has moved in, the gaming culture was subverted, to some degree, to become more like old media. At the same time, gamers and kids are turning away from old media to new, interactive, participatory media & user-generated content, and are actively generating content. Where does that leave us, and the media?