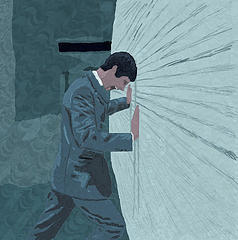 I may have mentioned a few times before that I’ve been having some trouble with my Sony Vaio’s battery. No, strike that out: My Sony Vaio’s battery is dead, basically. I’ve bought it hardly a year ago and the battery life is down to about 10 minutes.

But hey, no problem, I bought the laptop at Sony Style Store Berlin and boy, do they have good service. They do, right? They sure aren’t like the infamous Dell Hell of the olden times? (Dell has changed a lot since, from what I hear.)

But as a Google search will confirm you, Sony Service Sucks. Sony Style Store Service Sucks even more. (Google would disagree here by pure numbers of hits, but it rhymes kind of nicely, doesn’t it?)

Mind you, I love my laptop. As long as it works. But at the same time, I’ve not gotten any positive response from Sony customer service.

It’s not just the fact that the batteries Sony used in this model (Vaio VGN-FE21S) seem to be of pretty poor quality. It’s rather that Sony’s customer service hasn’t been helpful at all: It’s crap.

Out of four (five?) times I’ve tried to contact them trough their store’s own contact page, I’ve got a single response – which was a hint to contact the Sony Vaio Support, thank you very much. Needless to say, nothing happened.

So I called the Sony Style Store again. And got a very friendly person on the phone, who told me in a very nice, but determined way that she could do nothing for me, at least not in terms of batteries, replacements, hints, service, or anything remotely connected. Instead, she offered, I might come over to the store anyway, so “we can check the battery”. “To do what,” I asked, “the battery is pretty much dead. Is there anything you could do about it?” But what they would do with my battery she couldn’t tell me. Well, thanks then, but no thanks.

But today I happened to be in the vicinity anyway, so I decided to drop by and see someone at the store. After telling the (otherwise very friendly) service staff about my battery problems, he said it happens. Laptop batteries don’t last long. “Not even a year?” I asked. “Well, it depends on how you use them, of course”, he managed. “But if you’re unlucky, well, that’s it.” Or something. So I mentioned the emails (“Spamfilter?” he suggested), the phone call (“Well, you can always drop by the store”), the different service numbers (“well…”). I also suggested that this whole story might not be the very best way to deal with customer requests.

“So what about the battery?”, I inquired again. If it had died within the first three months, Sony might have taken it back and replaced. (Wow.) Even during the first six months, I might have had a chance, or so I was told. “So Sony sells batteries which can’t be trusted to last longer than six months?”, I asked somewhat more annoyed than before. “It depends on how you use them”, he replied. And seriously suggested to always take them out.

(Of course that would help the battery’s life time, no doubt about it, but the point isn’t that the product lasts longer if you don’t use it, or is it?)

To the service staff’s defense: He did offer me a 10 per cent discount on a new battery which “will last longer”. (Regular price is 200 Euros or 275 Dollars in Germany, compared to 199 Dollars in the U.S.) But for some reason this didn’t entirely convince me. Anyway, how should I know it’s true? If the battery dies again after 7 months, I’d have to get the next one? Oh come on, you must be kidding. Give me one reason why I should believe it.

What kind of customer service is it to just shrug off complaints or not to even answer requests in the first place? Aren’t you listening to your folks out here, Sony? How do you think could I ever again recommend a Sony Vaio notebook to anyone who asks? But that probably doesn’t bother you, does it?

(What I find really funny is that I’m registered as a journalist in Sony’s customer relations database since I was working as an editor at the time I bought it. That doesn’t seem to make a difference to Sony, though. Which is kind of fair, I’d say: Why treat journalists or bloggers differently? Just treat them just as crappy as your average customer.)

So anyway, enough of the bashing. What I’d like to know from you guys: What kind of experiences have you made with Sony Customer Service?

hi peter, andreas had told me about your problems with the sony vaio since i have been looking for a laptop. i did fancy the vaio quite a bit. so i went to the sony center at potsdamer platz the other day, since i was in the area. i had time to kill before my movie. i went up to the laptops and was having a look a them. the service guy noticed me and i thought i had made good eye contact and body language that said, “hey, i am really interested in finding out about these laptops, because i actually plan to buy one.” but instead, he shrugged and started asking a man if he needed any help. that guy talked to him for a minute and then left. i began again trying to get the service dude’s attention, but he just ran off into the back room to hide. ok, in all fairness, he can’t read my mind and i could have jumped in his way or yelled to him that he should help me. but it was that typical salesmen thing like at a car dealership. and it bothered me. i guess i will have to take a man with me when i go laptop shopping. obviously we women just have no clue and can’t be bothered with.

why is the battery not guaranteed for 2 years? it would seem to me, that sony would stand for their product a bit more. no way can they really expect a customer to walk away with such lame excuses for a battery that didn’t last even a full year. have you written directly to sony about it? good luck either way. but it really does affect my decision. i am now leaning more towards the mac book.

after having read your story i am a little afraid to call sony for my problem with the battery. but it’s a well known fact now that sony and batteries are not a good combination. my mobile phone used to quit working unexpectedly in my pocket so i missed calls. so happens to other sony mobile phone users. eplus service replaced mine fast though. sony batteries start to burn. and sony has way more problems to deal with than their.. customers. microsoft, nintendo, apple, canon – all better than sony. the only thing is left is their brand. which falls into pieces because of this kind of word of mouth. oh, and because of bad ads: http://www.werbeblogger.de/2007/08/01/zwei-eierstoecke/

Yup, Sony and batteries seem to be a bad mix indeed. To be fair, I have to point out that another friend of mine has the exact same model and was lucky – his battery is fine after the same time. (Which I feel very lucky about, ’cause he bought it on my recommendation. Boy, that would have sucked.) But if you can’t rely on it, this isn’t worth a whole lot, is it?

@Jodi: There’s no guarantee on the batteries ’cause they’re wear and tear parts. But hey, if you use cheap-ass batteries, just offer free (or cheap) replacements! Also, I think I know the guy in the store – the few times I was there he was hiding at first, too. He’s actually pretty friendly once you talk to him: It’s one of those cases where I actually believe he’s pretty much a victim of Sony corporate politics, i.e. he’d like to help, but isn’t allowed to. (Which of course is even worse!)

Well, good luck with whatever you’re going to buy :)

So, i have a wonderful sony handycam. drc-pc1000. this nice toy comes bundled with a bunch of crappy-ass software on the device driver disc. I’ve misplaced the CD and have upgraded my PC, so, time to reinstall the drivers. Since i dont need all of the crappy-ass fluff that these hacks put onto the driver CD, i try to download it from their support portal. to get the link to the download, i give my unit serial number and model number. it then asks for the part number of this POS CD. cant continue. i search to find the number of the bundled software on the sony site, cant find it, eventually find it in an ebay listing.

so i call sony.

their answer – they do not allow you to download the drivers without having the physical CD. I just want to download video from my video camera. their response – stream video from the camera over firewire. this doesnt make my Adobe CS3 investment pay off. basically turns my 1500 buck camera into a nice firewire webcam.

i call their supplier, wont ship to canada. called support, i’m S%$$%-out-of-luck. found a distributor; they want 56$ plus shipping and handling. f- you.

My solution. Buy the same camera again. install the software. return the package. F you Sony.

For sale soon – 1 terrific camera, bundled with a home-burned CD install media packed with useless shit you’ll never use, and a product-life-long pain in your ass if you ever need support. Guess i have to work on my text for my ebay listing.

Thank god the other manufacturers have finally surpassed Sony’s image quality. I cant wait to get my Non-Sony High-Def Flash video camera with non-proprietary video format.

Well being a journalist doesnt seem to help,I bought a Sony VAIO FS 675PH model in late 2005 for 2000$ in the USA. Sometime in september the motherboard failed. I went over to the Sony service center in Mumbai, India and the guy didnt attend to me for over half hour. Then without inspecting the device he stated tht it cud be a motherboard problem and repairin it cud cost well over 500$ to get it repaired. I mentioned i am a free lance journalist with the Times of India but he didnt care less.

Needless to say I went in for a Dell. Service has been terrific till now. I had a small problem with the optical drive and Dell immediately replaced it.

Sony needs to get its act together if it plans to sell its expensive piece of rubbish any longer.

The 1st thing when they answer you is: You Laptop is OUT OF WARRANTY!!! (Without even check!) I faxed the receipt 8 times!!! Still not satisfied them! The 1st one is: We only received the cover page! I asked them: if you received the cover page, then what did I write on them?” “Uh, ah, blah blah….” Then the 2nd time is: We receive it, but the Dealer name is missing! could it get cut off!!! Then they suggested to me that I should MAIL IN!!!! …I swear to you!: DO NOT EVER BUY ANYTHING FROM SONY!!! Not only their Laptops SUCK! They DO not support you well in term of drivers …. You’ll Be Sorry if you BUY FROM SO STUPID SONY!!!