A long over-due blog post, I wanted to share some thoughts on the recent #iotmark event that Alexandra Deschamps-Sonsino and Usman Haque convened in London as a follow-up to the 2012 Open IoT Assembly (which produced this Open IoT Definition).

Most importantly (spoiler alert!) the #iotmark is a work in progress. You can follow along and/or contribute here.

Consumer trust and the Internet of Things

Why is it important to talk about IoT and a label, certification, or trustmark? Because in IoT, it’s really hard for consumers to make an informed decision on which products and services to trust.

Partially this is because implications of anything are hard to gauge in the context of connected, data-driven systems. Partially it’s because the categories of IoT products aren’t fully matured yet and it’s not always clear what to expect from one thing over the other. But also, there’s a lot more going on under the hood that makes it nearly impossible to tell quality work from crap.

A shiny box could be built with top security processes in place by a trustworthy organization, or it could be slapped together haphazardly by a scammer. How would you know!

As a starting point, inspired by a conversation at the event, I made this 4-quadrant test: 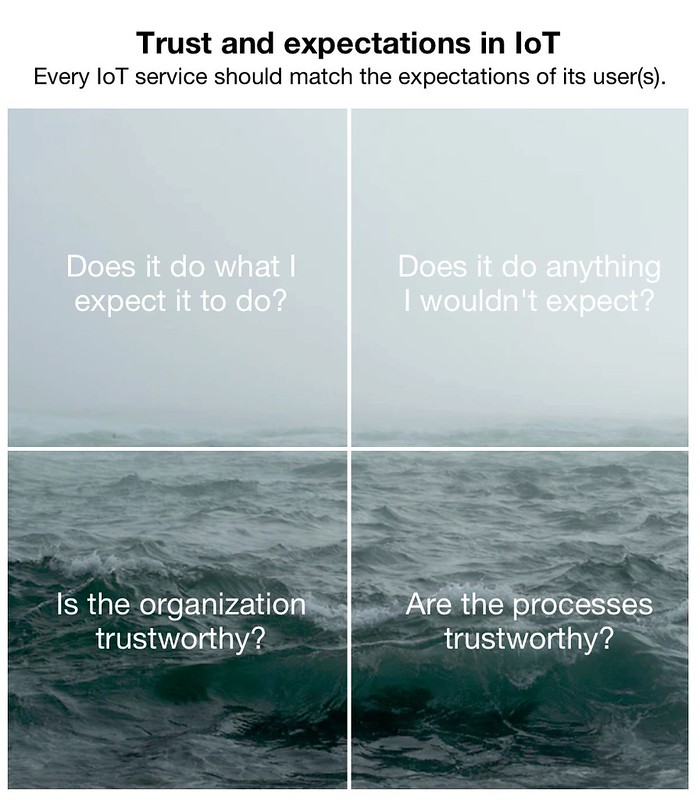 Trust and expectations in IoT by The Waving Cat/Peter Bihr

This group of 40-50 participants went hard at it with lots of intense and super interesting conversations. IoT is a huge space, and the challenges are manifold and real.

An aspect I found particularly interesting was the different schools of thought present—pretty much what Venkatesh Rao refers to as Purists versus Pragmatists.

I’m painting with a very broad brush here, but you could tell two underlying approaches to solving these very real issues:

When collaboratively editing the first draft of the #iotmark doc, we broke Google Docs.

While I tend to be a little partial here and lean a little more towards the pragmatic side of things, I fully see why both sides have strong points in their favor. In a context like this, where there’s no golden path that’s guaranteed to work, it boils down to a philosophical question.

Will this get traction?

So where will this go? It’s hard to say yet, but we’re motivated to make it happen one way or another. (I’m involved on a voluntary basis by heading the governance working group together with Laura James.)

The interest is certainly there, as is promising precedence as you’ll see below: Stacey Higginbotham just covered the #iotmark on her (excellent!) blog, staceyoniot.com.

And we know that informal, ad-hoc gatherings can have a real impact. Decisions are made by those who show up! Steffen Ferber was a participant in the 2012 Open IoT Assembly, and he shared the story of how he introduced the Open IoT Definition we signed back then at Bosch.

Now, 5 years later, this impacts Bosch’s work in the space. (If the images in the embed below don’t load, just click through to the tweets.)

Bosch used the insights of IoT open definition from 5 yrs ago in their iot thinking. Now in brand book. @Stefferber #iotmark pic.twitter.com/icqgMklutc

Strong commitment to openness at Bosch. "Some people hate me for missed business opportunities", says @Stefferber at #iotmark. pic.twitter.com/og3YTxtY3l

To me this is a great reminder and gives me a lot of hope: This type of work might not always seem glamorous and sometimes it’s hard to tell if it has an impact. But often that’s just because it unfolds its impact silently, in the background, and only much later the effect becomes visible.

A nice side effect of Bosch using the Open IoT Definition principles we laid out in 2012 is, by the way, that their products are now all pretty much automatically compatible with the GDPR, Europe’s new data protection regulation. Another case that illustrates that good ethics are good business!

I’m looking forward to continuing the very hands-on work on the #iotmark. Hopefully we can move it to a launch-able v1.0 shortly.

In the meantime, I’m also doing more research into the overall landscape and most promising approaches to an IoT trustmark, and how it might be developed and deployed for maximum positive impact.

It’s a good time to put a label on IoT for sure.