We visit x.factory. Impressive upscale maker space with great equipment. Funded by a real estate company, of course. Planned official opening for the complex is July, so for the most part the building complex is still empty. 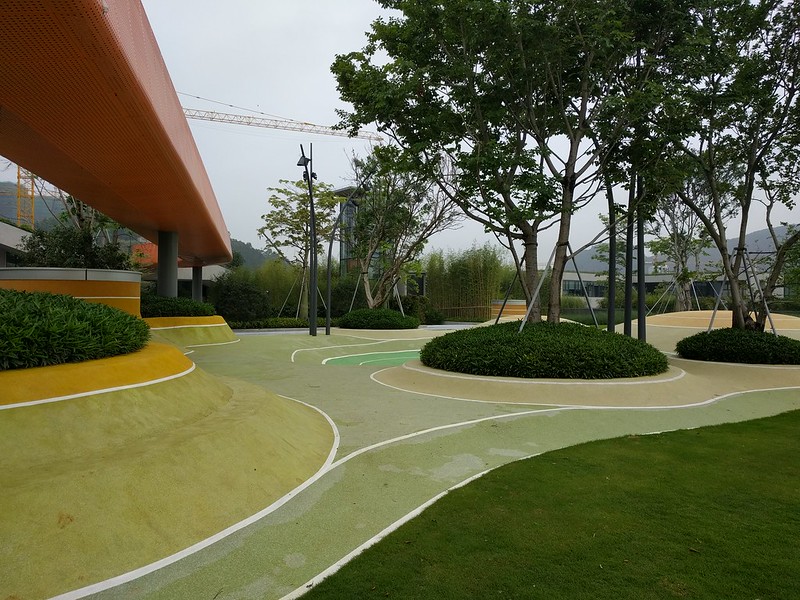 Near the entrance of the new complex, this skate park (or possibly just landscaping)

Note the trees in the photo above? They’re recently planted, hence the stabilizer beams. The whole site used to be a hill made of solid rock. (Keep that in mind, we’ll come back to it later.)

x.factory is part of the Chaihuo family of maker spaces. We had been to their smaller outpost at OCT-LOFT before. (Chaihuo and Seeed are very tightly connected, nearly interchangeable it seems. Within China, the Chaihuo name is very well known; abroad Seeed is the recognized name.) Chaihuo was co-founded by Eric Pan, who also founded Seeed Studios.

Wayne Lin, Director of Operations at x.factory, kindly gives us some insight into the history and future of China’s maker spaces. 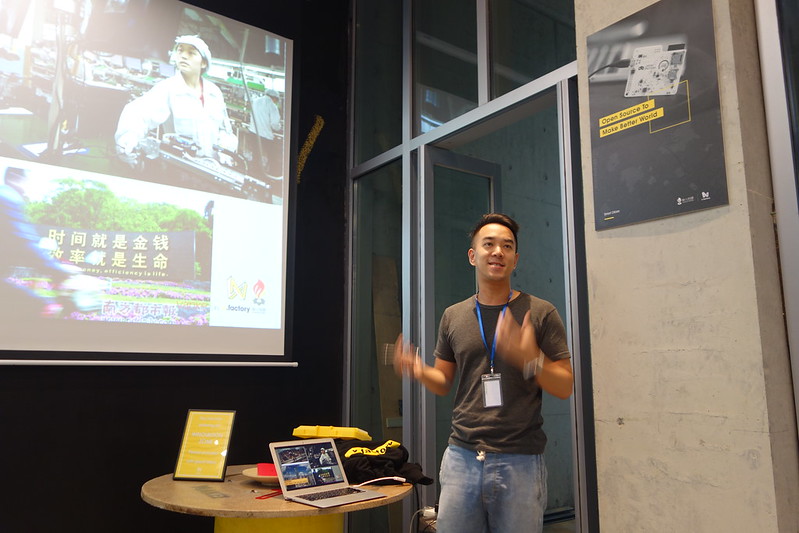 Wayne gives us the low-down on the Chinese maker space scene. 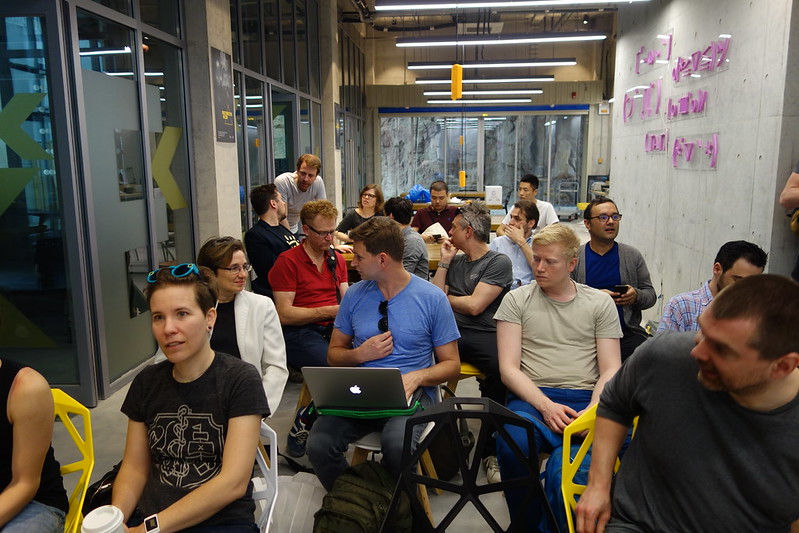 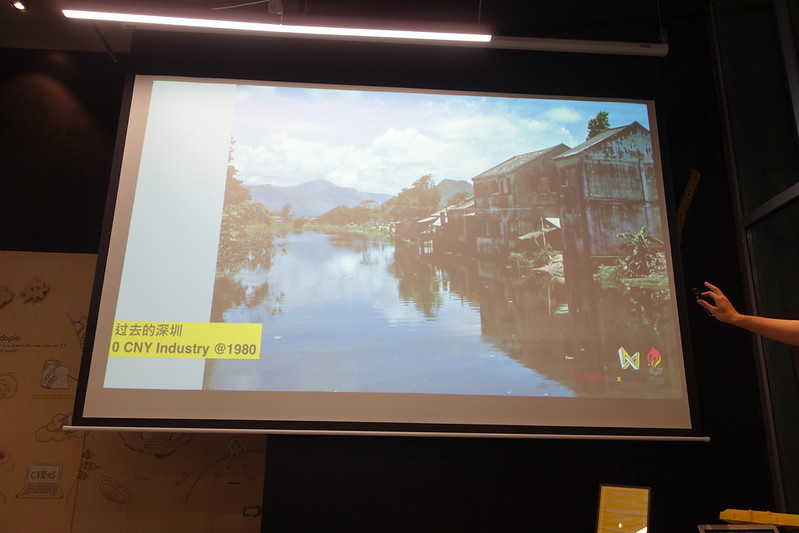 First maker spaces in Shenzhen started around 2013. HAX as well, and added a lot of energy. 2015 was a giant breakthrough year for this community. The government, industry, community all see huge opportunities for IoT and maker communities. 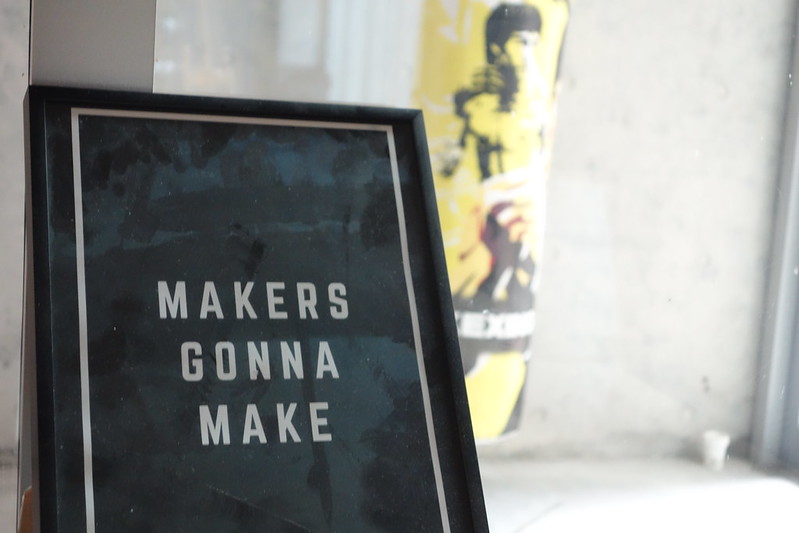 I can’t help but think that this situation is kinda-sorta like the exact opposite of Europe, where there’s too many ideas and project but not enough time in the day to make them all happen. 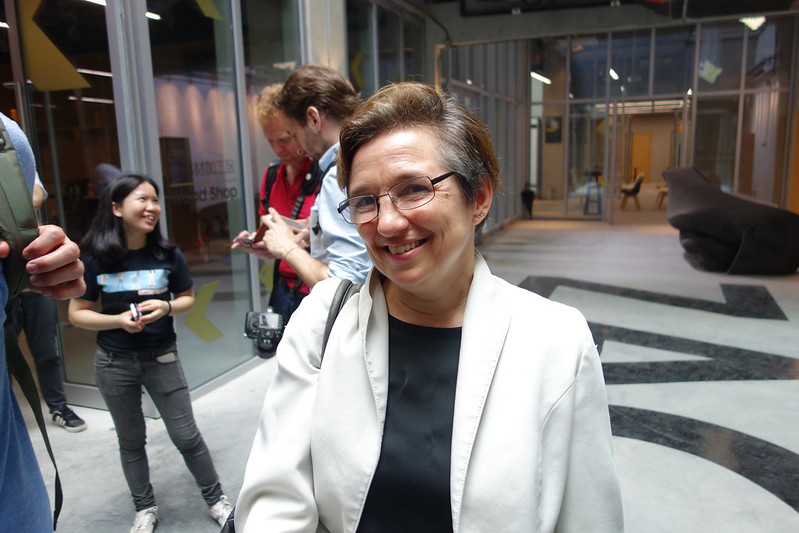 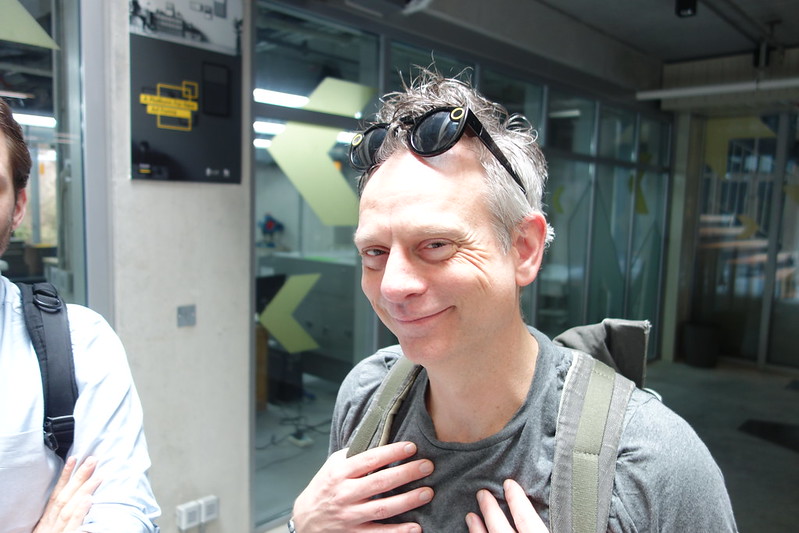 But what’s happening in and around these spaces is also a process of maturing, and professionalization. Wayne shares: We’ve been talking for a long time that we’d like to move from “made in China” to “innovate in China”. And it’s happening.

Vanke, a huge (formerly state-owned) real estate developer as a partner for one explains this super high-end looking building. It also means an obvious opportunity for those teams that work on IoT and especially smart buildings: Vanke could be the biggest buyer.

Resources like tooling and manufacturing are available easily here at x.factory. This is a recurring theme on this trip: Resources (including funding) seem to be available if you have the right idea.

A slide reads “Make with Shenzhen resources, at Shenzhen speed.” They mean it. Both.

“We’re like translators. We help makers develop and sell their products.”

An audience question about open source: “We need more projects that use open source.” They want to make an impact this way, and see open source as an exciting opportunity.

Wayne gives some background about the role of real estate and why they are so interested in this space: The property market in China is crazy right now. This also means a huge market opportunity for smart building tech and IoT. All of China is a construction site, lots of new buildings go up all the time. But how do you drive people to your mall? That’s a big challenge for many developers.

Asked about the future of Shenzhen, he says: Shenzhen’s future still looks bright. It’s a young city. Average age is maybe 30 years old. It’s very innovative and entrepreneurial. It’s one of the most exciting cities in China. He adds: Sometimes more experienced people know better how to build a good life, more experienced designers know how to design better products even if it takes longer.

The concept of x.factory is that of an open factory, an open maker space. Openness and open source are at the core of the project. Many projects here have an impact way beyond one company. 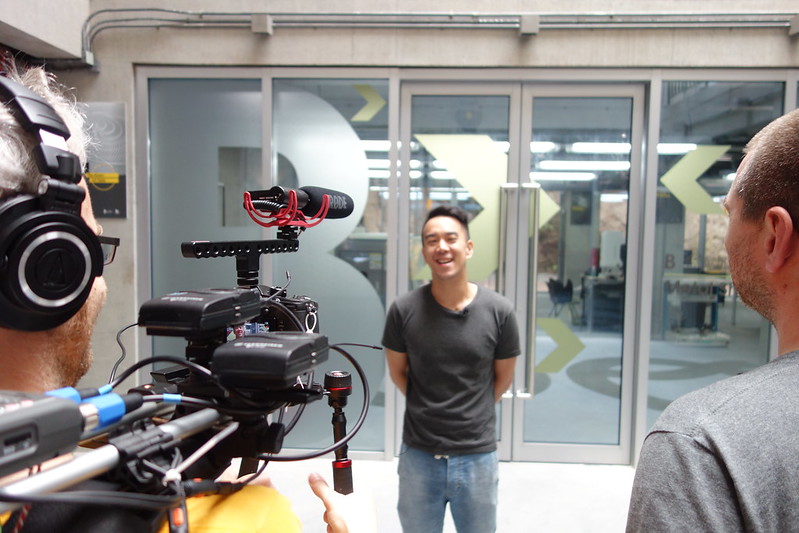 Wayne during an interview for the documentary

We continue the conversation in a smaller group as part of an interview for the documentary that’s being shot about this trip.

During an interview we hear choppers and explosions: For real estate development in this particular area, solid bedrock needs to be blown up. The very spot of the building complex we’re in used to be a hill of solid rock. 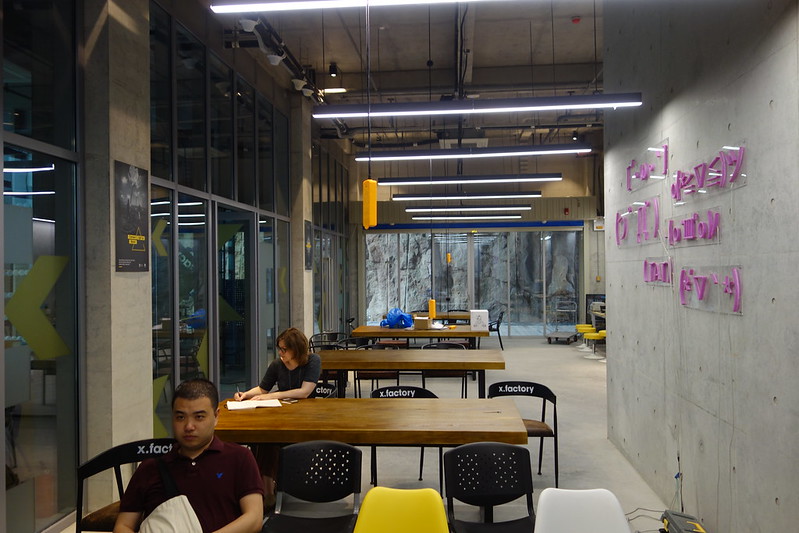 In the background, outside the windows, you can see the bedrock this complex is built on (and into). 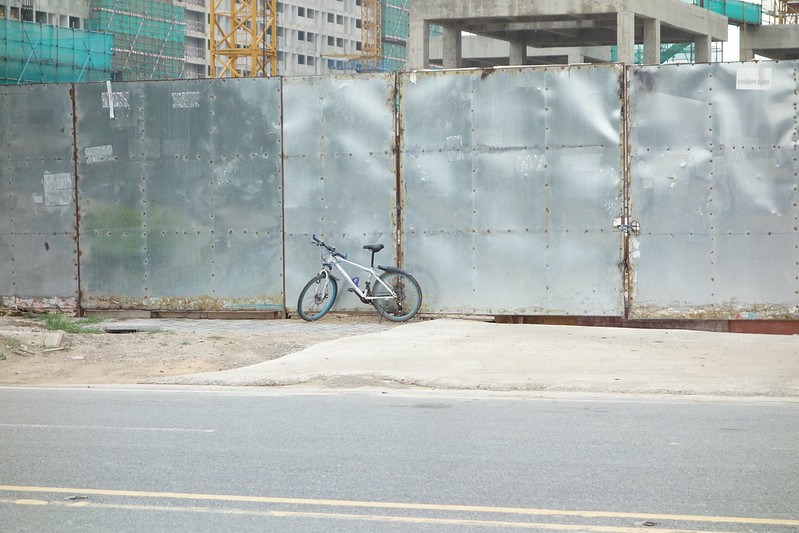 Outside the building, there’s a huge construction site.

In an uber-cool and clean concrete and class office, behind a little curtain, there are a bunch of cots: A quiet corner for a post-lunch nap.

Maybe the most advanced smart rear view mirror I’ve spotted yet: This one show simultaneous live feeds from a front and back camera and records both—as far as I can tell in full HD. 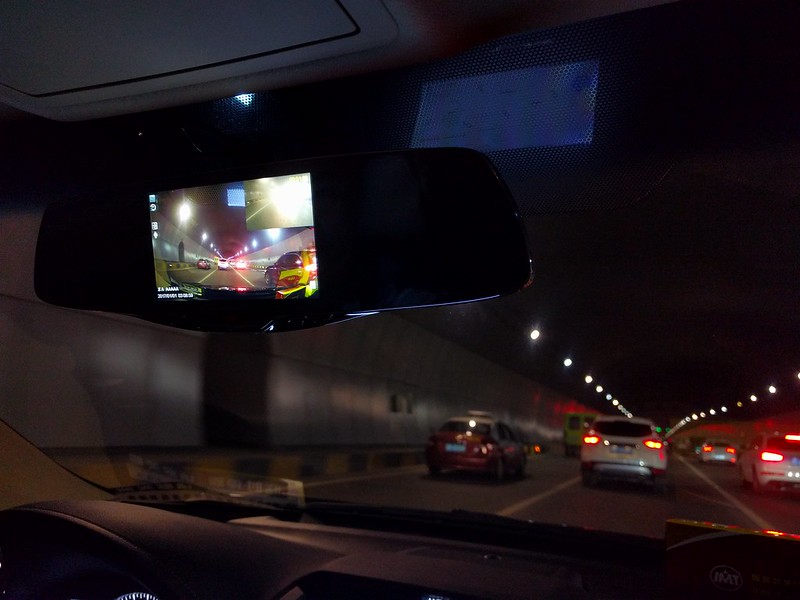 Idea: Chinese maker spaces have great resources and expertise but lack projects. European creatives and entrepreneurs are full of ideas but might lack the time and resources to realize them.

Can we team up European creatives with design schools to share their project ideas, then master students under supervision by a professor, and in close collaboration with the creatives, own these projects and drive them. They realize them in China with the expertise and resources of Chinese makerspaces.

Chinese spaces get projects, students can cut their teeth, the ideas get realized. Everybody wins!

A QR code on our lunch tables replaces the menu: Scan in Wechat to order and pay from your phone. Next level convenience. 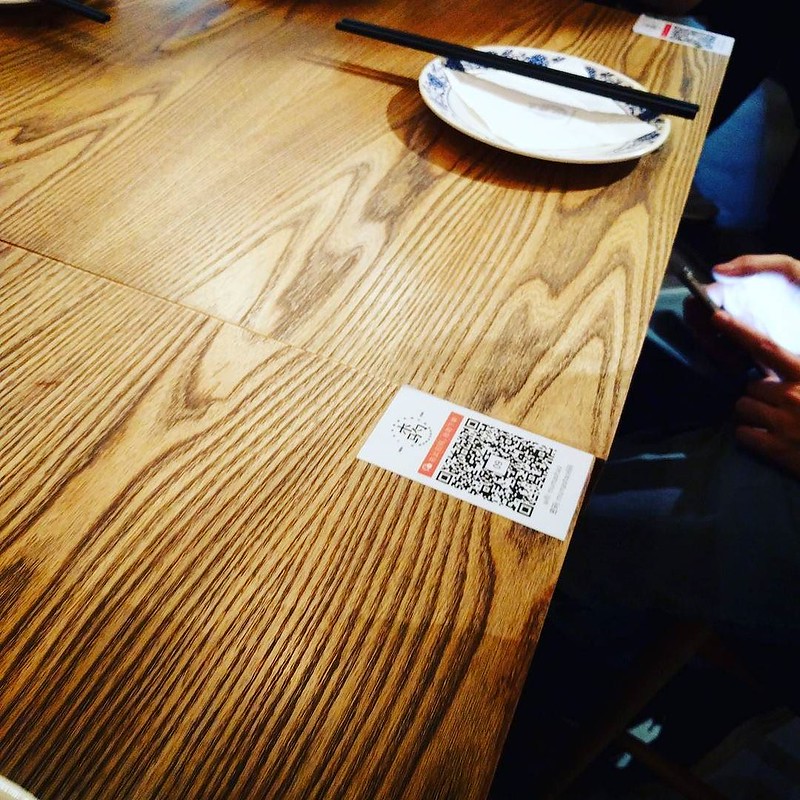 Scan QR code to order and pay your lunch.

I can’t get over the fact that the new HuaqiangBei road, simply by becoming a pedestrian zone, makes the whole area feel so much more tame than it felt to me just half a year ago. 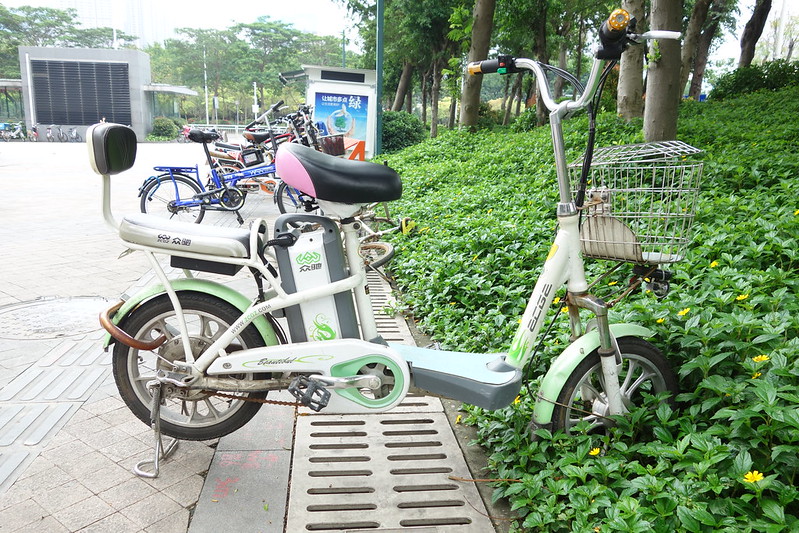 This, too, is an electric bike. They don’t have to be fancy.