Slowly but surely we’re upping our Wechat game. I make my first event QR code. No event is complete without this code as it allows for everyone to join a group chat and hence to connect with the other participants. None of that fussing around with Facebook groups, email lists, LinkedIn requests and business cards: Everyone is in one group before, during, and after the event. It’s super easy.

The Great Firewall is a strange thing indeed. It doesn’t work in absolutes, it seems. Rather, sites and services are blocked sometimes, not at others. Mostly it makes accessing parts of the “Western” internet slow and unreliably. This leaves us in a strange situation while we’re traveling. As foreigners we cannot fully access the Western web, yet due to language and knowledge barriers (we don’t know the apps, and wouldn’t be able to make any transactions without a Chinese bank account anyway) we can’t really use the Chinese web either. At times we’re fully connected, at times we’re mostly offline. We learn to think of the internet like weather: There are good days and bad days, and either way there’s no point in working yourself up about it. Today was a good time day.

Off to the airport, zipping back by maglev at 300 km/h. I could get used to this. Shenzhen here are we come!

Airport security works slightly differently in China. A big focus here is on explosives (bags get swiped for traces at least twice), as well as lithium-ion battery packs. My luggage gets scanned twice because it looks like there might be a power bank in there. (There isn’t.) Power banks also need to be taken out of the bag during security like liquids and laptops. Pudong International is a quite impressive airport, huge and super clean, and with a strangely hypnotic and cool ceiling. 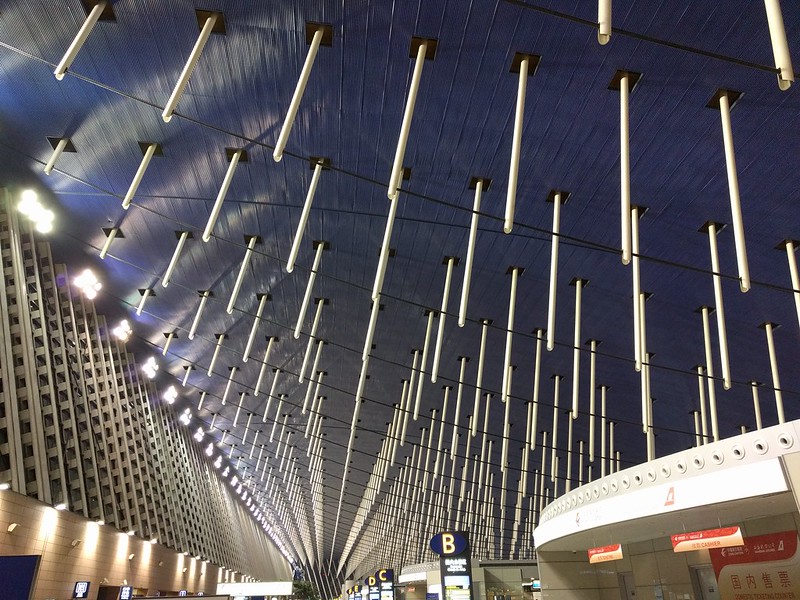 Surprisingly tasty airport dinner, and the quickest boarding process I’ve ever seen. Within 5 minutes, every passenger is processed and on a bus out to the tarmac. Alas, we don’t get to leave: Due to high air traffic, the flight is delayed on short notice and the bus takes us back to the terminal. We end up leaving for our 3-hour flight two hours late, at 11:30 at night.

Walking through the airports, seeing the batteries of trolleys, the scale starts together sink in. While hardly half of the population of Shanghai, Shenzhen has a population of just over 10 million. That’s 3x Berlin and just about 10x Amsterdam. For a city hardly 30 years old and famous not for being a city but almost more of a city-sized factory.