In the morning we split up into teams. Marcel takes one team back to Artop to work on the bike project. For me the morning is for more market time. Or so I thought until realizing that most of the electronics market doesn’t open until much later.

Market stalls open whenever they want. Some are open early, others still closed at 12. The distribution of the market is still as confusing as on day 1.

It’s a rainy day. Outside a street restaurant I watch a middle-aged man chop chunks of meat with a cleaver. An electric gate plays a warning sound while opening: An extremely lo-fi digital version of Pour Elise.

From the sidewalk I see a fake Genius Bar. It’s about 8 sqm.

In the afternoon I visit the somewhat luxurious Maker Showcase inside the market: A sort of upscale makerspace or showcase for makerspace-type products.

“The face of the world is changing”

Marcel had shown me a video of a cute robot what ominously repeats this message: “The face of the world is changing.” I can’t get it robot to repeat it to me, but an overall feeling of looking into the void remains.

Robots are everywhere. Book stores would have a little robot at the entrance. They are specially frequent in ads. 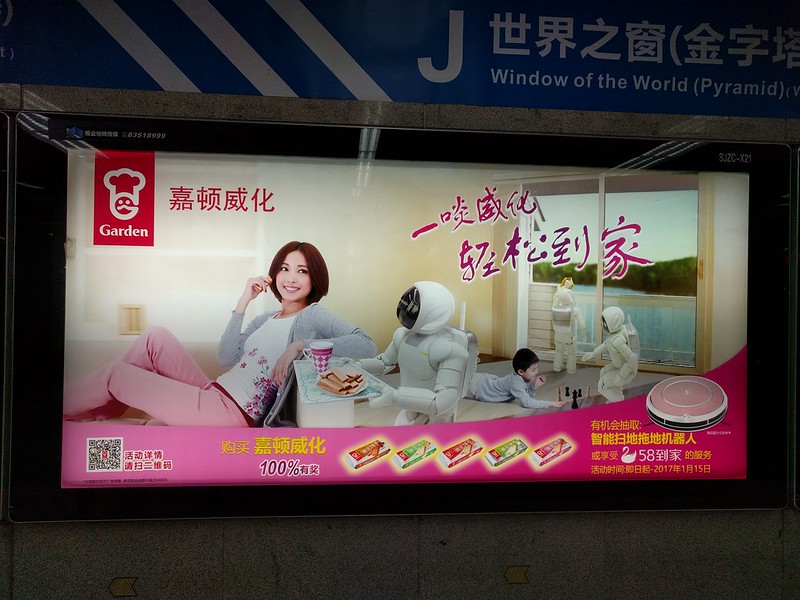 This ad is for crackers. But of course it has several robots in it.

The showcase room offers an immersive VR experience: a hanging bridge across the mountains shows inside the VR goggles, with some catastrophe going on in the background for kicks. 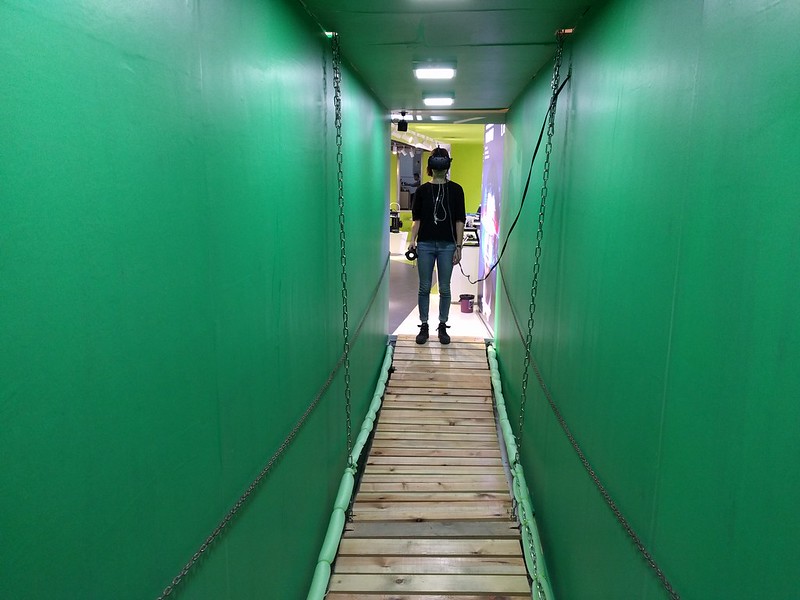 The immersive VR bridge of death

As I’m halfway across the virtual bridge, a part of the real-life bridge breaks under me and I crash down. My leg hurts and I lose some skin. The attendent pretends nothing happened.

We hunt for some small giveaways for ThingsCon. I visit the security mall once more.

We head to the Shanzhai mall, I’d love to see more of the famous/infamous Shanzhai phones I’ve heard so much about.

First impressions: They are not as crazy as I expected. Some knockoff phones, refurbished phones, 80s mobile sized gold phones, Ferrari-shaped phones, ruggedized flashlight power bank phones. OK, maybe a little crazy. We also start negotiations for a dozen or so memory sticks to see what the transaction is like.

That was a lot of malls. We indulged a little for the full Shenzhen experience, our haul includes some memory sticks, a tiny wifi camera drone, some power plugs, clip-on fish eye lenses.

Over dinner, we plan tomorrow’s interviews. We also decide to chase a new lead for the bike project: A seller of smart locks on Taobao, an online market place. (Think of Ebay + Amazon on speed.)

Over the course of a few minutes, our amazing translator Chris arranges that we work our way upstream from seller to the folks who build the hardware and to arrange a meeting first thing in the morning. All via chat, at 10pm. 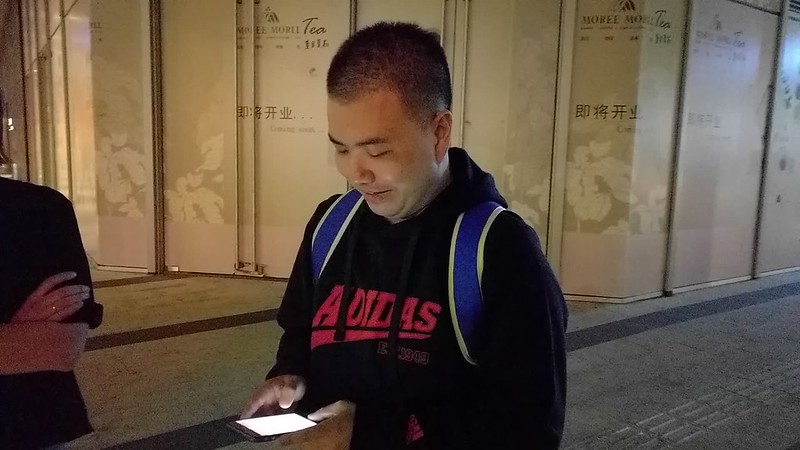 Out on the street, tracking smart locks upstream.

Tomorrow is “Singles’ Day”: November 11, or 11/11, or four single 1s, get it? It’s China’s take on Black Friday: Online all stores will have massive sales starting at midnight, so everyone’s up late to hit that buy button.

Singles’ Day helps our arrangements as we get even quicker than usual replies to our requests to meet the mysterious maker of smart bike locks on Taobao.

A TV show full of stars will live comment the overall sales record this is going to set, like every year. We learn later that (like every year) all sales previous records are broken.