I try to write down first impressions while they’re fresh: There’s a day or two in which the colors, the noises, the smells of a place are new and unusual; then the brain adjusts and it becomes a regular place. Those early days are the best to take photos, too: Things you notice as standing out still do stand out. Wait for a couple of days and they’ll blend in as the mind adjusts.

Arriving at Lisbon airport is quite lovely: It’s a tiny airport given the size of the city it serves. (Cue Berlin airport jokes.) A few minutes later we pick up our little rental car, happily surprised by just how well the car rental staff speak English, and are on our way south.

When I grew up, one of the most exciting things on our loooong drive to our summer vacations at the North Sea was to see a couple of stork nests – if we were lucky! – during the last couple of hours drive up in Schleswig-Holstein, Germany’s northern-most state. Occasionaly throughout my life I saw them elsewhere; mostly in or around zoos.

Yet here we are, surrounded by stork nests left, right and center. The electricity poles along the highway are packed with them. It’s like rats in the cities only, you know, with storks. Unbelievable. I can’t tell why that strikes me as unfair or even unexpected, but somehow it does.

The blue and white of Portugal. It’s maybe the most ubiquitous and most traditional of color combinations, and found wherever your eyes might wander. Tiles, table cloth, tiles on floors, restaurant signs, tiles of walls, tiles at souvenir stalls… come to think of it, maybe the tiles are even more ubiquitous than the blue and white. 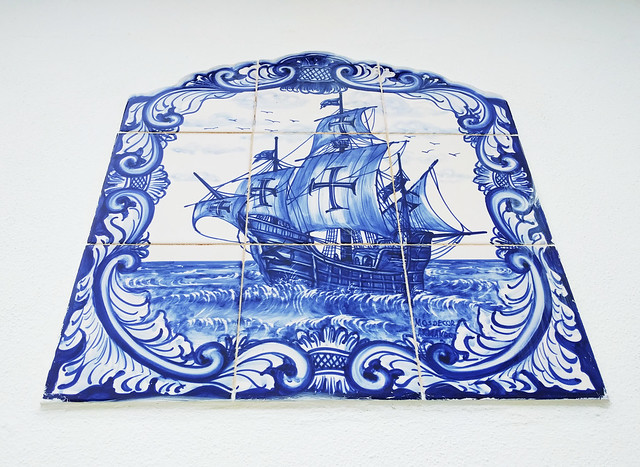 Portugal is all tiled, mostly in blue and white.

When I visited the Algarve a few years ago for some surfing with a friend, we stayed in a tiny village by the name of Odeceixe. It had two restaurants we went to frequently: The very traditional, top-notch Taberna do Gabao, which excelled in seafood and meats and was great for all-night group dinners with new friends we met along the way. And a more modern, slightly fusion-y place that made light and most excellent mediterranean meals: I wanted to go there just about every day. (I drove by that town on the way back up to Lisbon and it looks like the latter place has closed.)

What I somehow failed to realize at the time is that this sample of two did not reflect the state of eating in Portugal. The seafood here is amazing; meats are a treat. Yet, the style of preparation seems to be very traditional, bordering on formulaic: Grill the fish/meat item, serve with rice or fries. Sauces are rare, marinated things are rare. Salads are (very) basic, vegetarian options are sparse. Olive oil is fantastic – if I dip my bread into the oil here I’m in heaven – as are the olives you’ll inevitable be served as a little starter.

It’s a cuisine I thorougly enjoy indulging in every now and then. On an everyday basis it can be daunting, especially for a vegetarian like M, but even for meat eaters.

Between croissants and pastel del nata, between all the rice and fries and bread, the trick seems to be to temporarily forget just about all you ever learned about carbs and just roll with it. In the meantime both M and I were quite excited to have discovered a great vegetarian place around the corner.

It’s easy to forget these days how much we’re used to having navigation data at our fingertips at any time: Google Maps plus GPS means we never really need maps. I still remember road trips meant packing a big-ass map or atlas of sorts: I’m not nostalgic for it, if anything it tells you my age.

But data is not distributed evenly, and not all data is created equal.

Trying to swing by a restaurant on a cliff for a dinner over sunset, Google took us offroad in a way I hadn’t been in a while. Turns out that Google’s map data for rural Portugal is very, very flimsy. 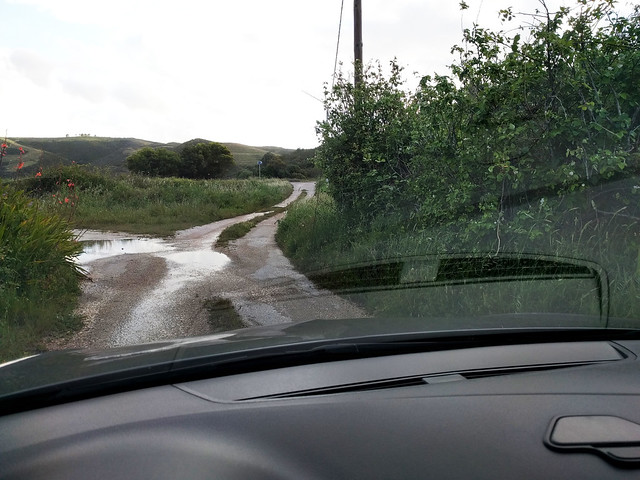 Google’s road map data in rural Portugal seems patchy at best. This is the kinda-sorta real road we returned to after a long stint on an extremely poor mud road.

The road Google Maps took us on was distinctly 2-3 level beyond the one pictured above: I took that photo only after we were back on an actual road. Before (and before turning around and very slowly backtracking) we were on a gravel road. Before that, on a dirt road. Before that on a dirt road with ruts so deep I’m tempted to call it a rutty cow path: For hiking it would have been acceptable just so. For anything on wheels, absolutely not.

Sagres Point is the most South-western point of continental Europe. It’s from around here that the Portuguese maritime exploration of the world was launched.

Today, a food truck offering (in German) “Die letzte Bratwurst vor Amerika” – the last bratwurst until America added a bit of a sad touch to an otherwise beautiful scene. 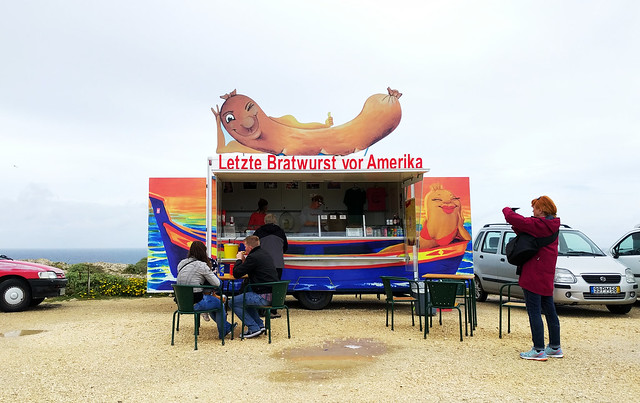 Truth be told, though, the view from the cliff inside the fort (Fortaleza de Sagres) about a kilometer down the road feels more like the real deal. (The fort is totally worth it.) It’s not technically the most South-western point, but because the view is totally unobstructed (there’s no fenced off lighthouse in the way and you can roam freely) means you can stand at the edge of the cliff and look West and let your imagination roam freely. If you have to choose, go there instead! 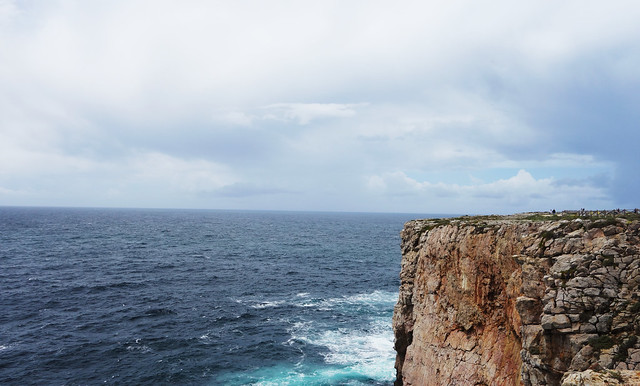 Fort Sagres may not be technically the very most south-western point of continental Europe, but with its unobstructed views it feels like the real deal compared to Sagres Point up the road.

This trip is another chance to test our Prototype Pants, this time in both warmer and (very!) wet climate. M now has her’s too, for the first time. I’m curious to learn how they hold up in warmer climate: Will they be as comfortable as in the cooler climates of Helsinki, Berlin, London? 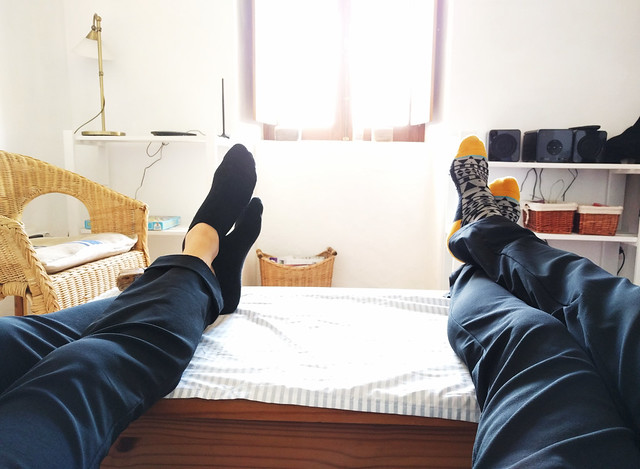 Testing both prototype pants under extreme conditions, aka a couch break.

On a hike we finally did manage to get them soaked through; to be fair, so were our rain jackets. The Algarve has had a record bad weather for months: The dive center hadn’t been out in the water for two months straight, almost every day of our stay had a severe weather warning.

So far, so good: Still convinced by the prototypes.

The last two days the weather let up, from severe weather warnings to lovely and sunny. I celebrated with a day of surfing, Michelle went to scuba dive. As we drove up to Lisbon we headed into the summer.