Note: The following is not a review of The Dash, but a look at some deeper interface and interaction questions around connected products.

A few days ago, I received a package from a courier service. Opening it, this is what I found: 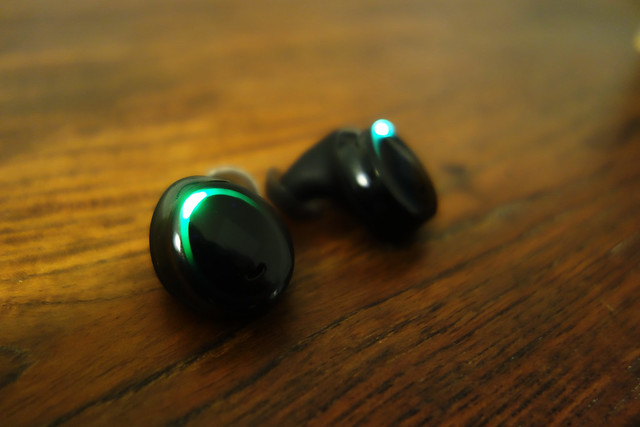 Even without looking at the old Kickstarter confirmation email I would have remembered this as it was part of a long (and expensive) Kickstarter season for me as we were ramping up to the first ThingsCon (to happen in May 2014) and I was backing more or less every speaker’s hardware project I could. Bragi founder Nicolaj Hviid was a speaker at ThingsCon, so of course I pre-ordered a pair of his headphones. At the time, I received an email saying “Every backer… will receive the stretch goal with their October/November or January delivery.” This referred, of course to late 2014/early 2015.

Now it’s early 2016, and the hardware projects back then are still just coming in, with all the usual delays one should expect in such ambitious, complex undertakings. And make no mistake, The Dash is as technologically ambitious as they get. I don’t mind these delays – when I back hardware projects I know it’s a gamble: It could just disappear, or it could be amazing. So far I’ve been very lucky.

What’s going on in there?

I couldn’t wait to test out The Dash. They looked and felt great, really well made, and fit into my ears snugly. Yet they didn’t do much. I put them into my ears and did all the finger acrobatics the handbook mentioned – long press the right, tap the left, what have you. To some inputs they reacted super smoothly, to others not at all. I quickly grew a little frustrated – until I realized that Bragi was aware of this and had already emailed a note to all backers: A firmware update was needed, and to be delivered within a few hours. And it was, and it seems to have fixed the issues I had struggled with.

And if that was it, this would hardly be a good story or worth a blog post. It also doesn’t tell us much about The Dash at all, which alas I still haven’t had the time to really take out for a run, but which so far looks and feels very promising to me. Again, this is not a review of The Dash.

The point is that before spotting that email by the manufacturer, I was entirely unable to diagnose what was going on (or not). No display, just a blinkenlight, and not a particularly eloquent one. There’s a built-in (for lack of a better word) agent that’s part of a voice control interface, but I couldn’t get the answers I was looking for.

I tried to take the earphones out of my ears to press the button in case the signal was blocked by my body. That failing, I wondered if the headphones needed to maybe be inside my ears to work at all – after all they also double as vital sign trackers, and are to some degree calibrated to work only in tandem and so might switch on or off certain features based on their proximity, or based on their position relative to the wearer’s body. Yet all I could get was the occasional feedback from the voice agent (“volume at max”, “Bluetooth mode enabled”), and a blinking/breathing pattern from the built-in lights. I had no idea what worked, what didn’t, or why.

This isn’t a challenge just for this product, but increasingly for all connected products: If the app works and is connected, you can diagnose and control everything. That failing, you’re stuck with the most minimal of feedback.

The device, working or not, is entirely unreadable. Yet legibility is the key to fixing, diagnosing, using, truly owning a device.

Connected products need to be legible and fail gracefully

A connected consumer product, just like a connected home and (especially) a connected city needs to be highly legible, and fail gracefully.

These are new challenges. Purely physical products would work given a basic set of affordances like electricity or water, which – at least in rich countries – are quite reliably available. Purely digital services on the other hand would either work if you could get online, or if you couldn’t would entirely cease to exist.

Digital-physical hybrids are different in that they have more requirements they need in order to perform. They also need to have much more carefully designed failure modes.

These issues are compounded if you look at the long-term perspective: Not only should your fridge, dishwasher, wristwatch, or picture frame work nicely even if the internet is down. It also needs to work if the company that made it goes belly-up.

Because how sustainable is a world in which you buy a fridge (a category of product that traditionally lasts easily 10, sometimes 15 years before it needs replacing) or a watch (which could easily outlive the wearer) needs to be replaced because a startup fails, or a protocol changes, or a mobile OS collapses and is replaced by another?

We need to think about these issues thoroughly: If we don’t, and produce a pile of trash that we need to throw out in a year or two, we’ll both waste insanely precious resources and also all the trust that any consumers might have in these interesting and potentially very powerful ideas.

For now, I can’t wait to take The Dash for a spin, or a swim – and to see how it’ll change over the next few months due to further firmware updates which might entirely change the experience over time.

ps. Speaking of values: We defined a set of values (explicitly including readability) for the connected home over at TheGoodHome.org/values.

You raise some important issues about connected tech. This is a new paradigm for us humans and I guess we’re all learning.

It will be good to get your review of the Dash. In particular, how does the bone conduction microphone work? No one has spoken about the quality of this in the Dash – how well you can hear your caller, and how well can they hear you in both quiet and noisy environments.