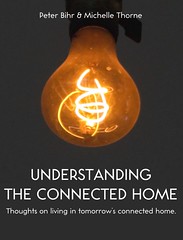 Understanding the Connected Home, my ongoing series of blog posts, just spawned a first spin-off: TheConnectedHome.org: Thoughts on living in tomorrow’s connected home. It’s a book written in a one-week sprint with Michelle. It was quite the week, and so worth it. As it stands, what we have there is a beta draft of a book – a version 0.9 so to speak – and a pool of research and writing to draw on and to polish and develop over time. For now it’s available as a full on snapshot over on Gitbook and I might cross-post some pieces here on this blog. Why two places? They feed into one another, and this way we’ll be more flexible in what we can grow this research project into.

Speaking of sprints, over on e-180 mag I wrote a piece on book sprints as a learning method: Topic sprints: The fastest way to dive into a topic. Thanks to Patrick Tanguay for making that happen.

For Interaction16 we just got to announce new keynote speakers I’m very excited about. (Spoiler warning: dinosaur images ahead!) We’re also going to have an open hangout with the local Helsinki community to see how we can best integrate the event with the local UX scene.

ThingsCon news! We’re still polishing the new website, the public slackchannel/backchannel is running smoothly (ping us to join in on the fun), and plans for ThingsCon future are being made. More info to come.

Next Festival took place in Hamburg, and for the first time in a long while in Hamburg again. Fun!

Been working with Bosch on several projects building bridges between tech/startup scene and the industry. One of them has started to happen this month and hence now public: Connecting managers who are going through advanced training (read: moving up from head of department to the next level) with startups in Berlin for a sort of cultural exchange. I strongly believe in these power of “soft” exchanges, so that’s great to see happen. Thanks for all the participating founders! The other things are still under wraps for now.

Creative Commons Poland had the 10th anniversary and both M and I were invited to speak there. I was part of the open innovation track and focused on the parallels and interdependencies between free culture, open source and open hardware innovation (my slides, “Atoms & Bits & Commons“). Such a great community in Warsaw, and what a great city!

Google X kindly invited me to join their first European flagship event in their Solve for X series. An impressive group of people and some truly stunning project ideas, like little edible water filled membranes to replace plastic water bottles.

Went to Netzpolitik’s 11th anniversary event and met all the friendly faces that work hard to shape net politics. Also, learned about copyright extremism and cyber foreign policy. If the talks are available online, make sure to watch them, particularly the ones about the behind the scenes of the recent (now dropped) treason charges against Netzpolitik, Leongard Dobusch’s on copyright extremism, and the one by Dr. Thomas Fitschen, Germany’s go to person for cyber foreign policy, who spoke a bit about his role in the government. Congratulations again to the Netzpolitik crew!

Did the quarterly OKRs, and all indicators are pointing in the right directions. It’s become a powerful tool for setting goals and keeping track of them.

Around NEXT in Hamburg, I first encountered the term Maltesian Dilemma in a conversation with Scott Smith, Marcel Schouwenaar and Sami Niemelä. I hadn’t heard it before, but it immediately made sense, and anyone on Kickstarter knows it: It’s the dilemma faced by early adopters who want to support 1st gen hardware but don’t know if the company will support it and not flip.

In November, I’ll be headed to London Mozfest to talk connected home as part of the IoT/connected home track that Jon Rogers and Ian Forrester curate, and will be hosting some shennanigans with Marcel Schouwenaar and Harm van Beek. Should be good fun!

ThingsCon Amsterdam will be taking place in December, once more curated by the lovely Amsterdam crew around Iskander, Monique, Marcel and their teams. Alas I won’t be able to attend (because vacation), but the line-up is shaping up to be fantastic.