The last few days, I’ve been working from Nova Iskra, a space in Belgrade. It’s a fantastic, gorgeous, buzzing place that’s kind of office, coworking, design incubator and education space all wrapped into one. And it’s great. 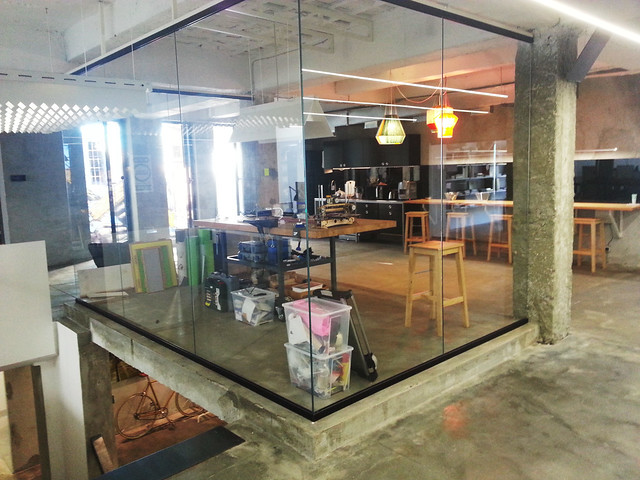 Workshop in an aquarium, kitchen in the background. Office space on all other sides. 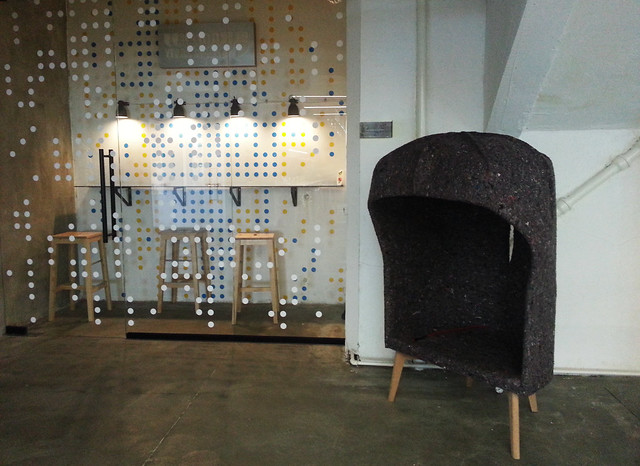 When Matt and I expanded from our two-person office to five people and re-labeled as @kantberlin, a similar vector emerged to some degree: To go beyond desk sharing and into heavy (or lightweight? What’s the appropriate metaphor here? Anyway!) collaboration.

But the time spent at Nova Iskra and the chats with the team there were inspiring and triggered all kinds of thoughts. And like so often, thoughts are shaped better, collaborators found more easily when they are shared publicly.

So let me just think out loud, keeping in mind that this is nowhere a solid idea, or even set of ideas. It’s really just a brainstorm of sorts, pretty much unfiltered.

Building on what I’ve seen at Nova Iskra, what if we set up a thing that has (all of? some of?) these elements:

Imagine a large industrial space. In a corner, an admin office. 2-3 meeting areas, some open, some closed. A small maker workshop with laser cutter and 3D printer/scanner as well as photo booth or green wall for product and promotion photos. Desks for another 5-10 people, to get access to full production capacities (webdesign, dev, etc., which always comes in handy, particularly if there’s client work, too). Kitchen area. Space to showcase stuff being built. Workspace isles for 3-4 teams at a time to build their stuff. Public facing coffee shop for meeting and to get some walk-ins, and for the occasional yummy pick-me-up. Throw in a small event space (up to 30-50 people) and we’re golden.

Update/note: This would be different from coworking spaces insofar as the business model isn’t renting out desk space. Desk space would be available based only on a skill and chemistry match — on likely contribution to the people in the room — rather than on a who-wants-to-pay basis. This is important as it means that desks don’t need to be filled just for cash flow, and thus allows a much stronger focus on the community.

The incubator-like part of this might be particularly interesting. And before we get into a semantic discussion on what exactly constitutes an incubator or if we need another one, let me quickly clarify what I mean when I say — for lack of a better word — incubator: A mix of mentoring and advice, access to a network, support with finding financing and investments. A general support structure for getting the ball rolling. Come to think of it, maybe non-incubator might be the better word. Anyway, think of it as your friendly neighborhood version of just that.

Thinking off the top of my head, I wouldn’t go with traditional startups (these seem to be taken care of nicely already) as much as more sustainable or more hard-to-fund projects. There are quite a few out there with tremendous potential and ambition, but that don’t fit the more established funding structures. As a small, agile player, this could be worked around more flexibly it seems.

While I don’t think we could fund projects directly, I think we could help hustle up angel or seed funding for the teams. (Maybe down the road, we could even set up a proper fund, but it’s not top priority.) As for the things I think this thing could provide, the network including peer and professional support, attention by investors and media, coaching of all sorts, and access to top notch developers and designers on top of everything else — I think there’s tremendous value in this beyond the merely financial. It would probably be less of a strict incubator, and more of a (buzzword alert!) incubator-innovation-tech-hub-cluster thingy, or in other words, the cool place to be if you and your team want to work side by side with some of the best people out there.

It’s just gut feeling, but I have a hunch that partnerships with tech and media companies should be doable; the good kind, where useful and needed stuff (ranging from financial support to access to tech infrastructure or media attention) is provided.

All in all, and at first glance, this seems to be a lot of work (funding, finding a space, getting everything off the ground, etc. etc.) — and very exciting.

Given the right circumstances, support and potential partners, I might be willing to own up and take the lead in building something like this – to some degree, it ties right into many threads I’ve been working on over the last few years anyway.

For now, it’s just a bunch of unfiltered ideas. Could be implemented, or simply dropped. Maybe some elements mentioned here could be worked out independently, too.

Would this whole thing scratch an itch? Would it be as valuable to the community as I think it might be? What do you think?