The other day, I attended a talk by Martin Spindler followed by a panel with both Martin and Louisa Heinrich as well as a couple of researchers and scientists. The topic of both: Social Objects, or how the Internet of Things (IoT) makes devices talk to the “real world”. 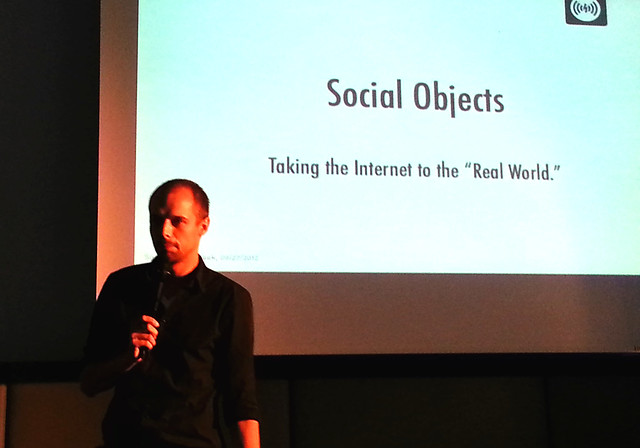 One theme was recurring, and I fully agree it’s the most relevant one: How can we make connected devices meaningful for our lives?

There’s an aspect of pure, open-ended exploration and geekery that is highly valuable – building stuff because we can. But in the long run, that’s not enough.

As Louisa insists, what will drive us forward is to always keep the human side in mind. To build stuff for humans, to solve our problems, not to retrain humans to appreciate connectedness as an end in itself.

Martin pointed to our much-beloved, ever lasting example of failed retro future ambition, the Internet Fridge. While they’ve been built for years, they have never gained traction, and likely never will. Why? Because they solve a problem that doesn’t exist. Because they suggest to take control over your life instead of enabling you to be you, or to strive to be a better you.

Let’s stay with the internet fridge for one more moment and take a closer look at the potential problems it might try to solve, and how that would go down:

What I’m trying to get to is this: We need to consider clearly what the actual needs are the we address, and then match that against a bit of a common sense reality check. We’re just at the beginning of a huge development. And as these things go, in the beginning is when the most interesting stuff happens and the rules and norms are set. So let’s get to work and make this stuff good.