So I got around to testing out the Nike+ Fuelband for a few days. Instead of a full on review, some quick, off the cuff impressions, thoughts & notes as long as they’re fresh:

The Fuelband is smooth, feels nicely heavy and well made. The rubbery surface is comfortable to wear, if maybe a bit too clunky, especially if you work on a computer a lot.

The display lights up only if you press a button, so usually you just walk around with a black wristband. The display is a set of LEDs and can show time, steps, calories as well as Nike’s own “currency”, the so-called “Fuel”. Below the display you see a status bar that starts with a single red dot and grows with your activity, going from yellow to green until you reach your daily goal. It’s fairly subtle and works intuitively. Having a watch on the wrist was a pleasant change as I usually don’t wear watches much. 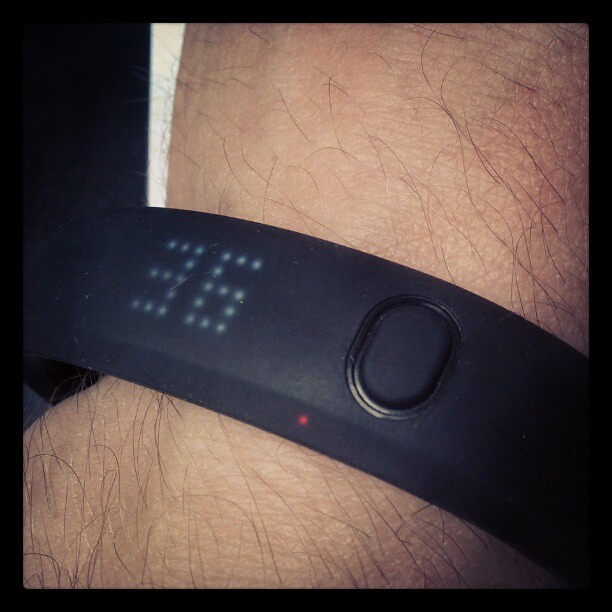 Starting out, the Fuelband shows just a red marker: Go get a move on!

The battery lasts for a few days before you have to recharge via USB. Data upload works through USB, too, so it’s simple but not terribly elegant.

To set your goals, you enter your desired activity levels through an app on your desktop or iPhone (I use Android, so no mobile app for me). The default “normal” active day is set so low that I reached it even though only starting my test at 4pm the first day. Ramping it up to “active” days helps a bit, so you actually have to at least walk a bit during the day to meet the goals. I assume if you commute by car and work at a desk all day, it might be a challenge. If you’re somewhat active anyway it feels like you have to set the goals somewhat inflationary. Or maybe I just happened to have a particularly active week.

Over time, you can gather a number of stats, accessible through the Fuel app. Examples for the kind of stats you get, besides some graphs to indicate the overall development, would be Best Month, Best Wednesday, Average Activity etc. It’s intuitive, but doesn’t go very deep it seems.

I expect this will change if the API ever really opens up and more developers can play around with it. If you could use alternative interfaces like the Pebble for example that might become more interesting. As it stands, it feels a bit… how do I phrase it… American? I know this doesn’t quite capture it, but it’s this very Nike-ish tonality that I always personally find a bit off-turning. Then again, it’s their product and it’s a fitness product, so I guess that’s alright.

Right now it’s still in the novelty phase, and several people actually approached me at a restaurant to ask about it.

So in short: It’s a smooth, well produced gadget. Having tested it for about a week, it feels like the novelty and effect are wearing off already. I caught myself not even putting it on anymore after 4-5 days. The API might change that once it’s there, if it’s ever going to really open up.