What a day! My old school friend Ryo kindly offered to take us on a little tour, so after (at last!) moving into our airbnb place, we hurried over to the fish market to meet him for lunch. It was Sunday, so the market itself was largely closed, but the restaurants in the old market area were open. We went to one that has been serving top notch sushi around for some 80 years or so. Finding a decent vegetarian option for Michelle turned out extra tricky here, but in this case, who can blame them. In the end, some lovely stuff arrived for her, and a set of incredible mixed sea food for Ryo and me. 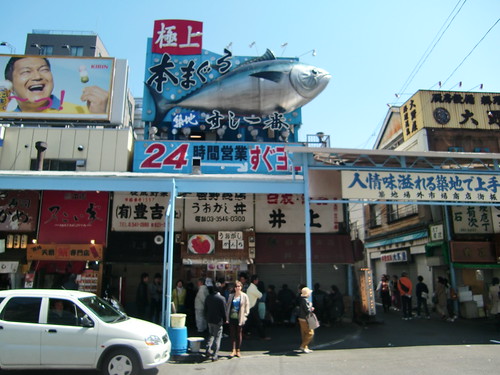 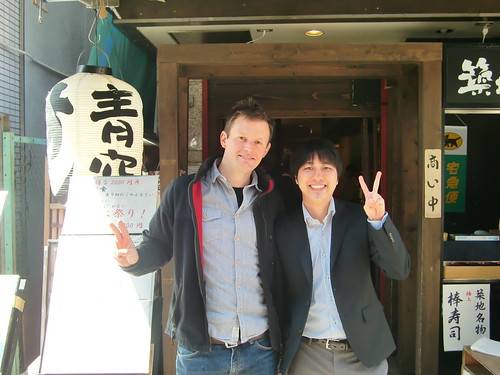 No photo is complete without the hand gesture. In the background, the fantastic fish market restaurant. 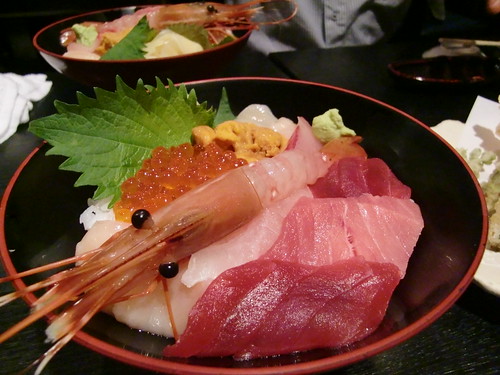 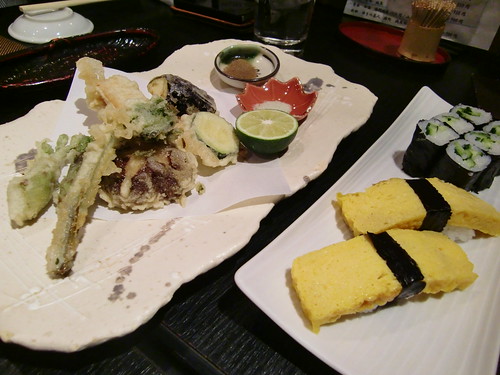 After some tough negotation, Ryo got the fish restaurant to come up with some vegetarian options, which also turned out great. 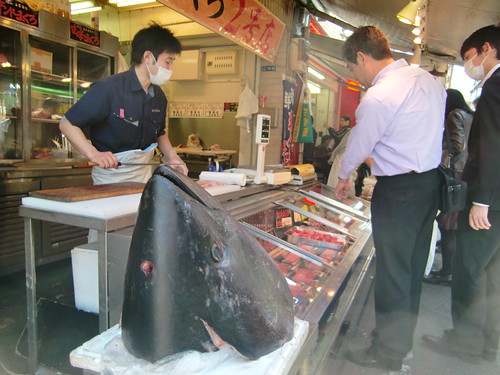 Sadly, this is what the fish market is really about.

A round of obligatory fish market photos later, we press on to Akasusa, an old neighborhood dominated by a famous temple, Senso-ji. Seems like it was a holiday as the temple was bursting at its seems, so we quickly drew fortunes (best, good and bad for one of each), tied them to a grid (to make the good fortunes last, or to leave the bad fortunes at the temple – you choose), joined worshippers at throwing some coins into a collection box over a crowd of heads, and ate a quick snack of blue chocolate covered banana. 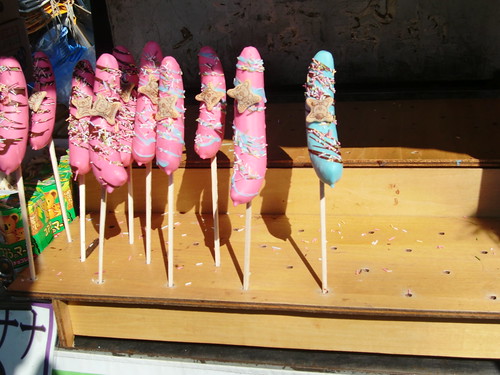 Energized by the sugar shock we were prepared for Akihabara, the famous former WWII black market for radio part that has over the last few decades evolved into the home of the true otaku & paradise for gadget lovers everywhere. Here, gaming arcades are extra large and packed, gadget shops deal with hardcore computer equipment, and entertainment options for young men and women abound.

One thing is called (bad translation I assume) “sticky photos”, and aimed squarely at young girls: The patrons get into a photo booth that from the outside is a nightmare in pink, but on the inside looks quite professional. After snapping a handful shots under immense time pressure, you go next door (next booth, really) and start an intense and largely automated photoshopping session. Classics include speech bubbles, hears and stars, as well as a number of more random youth culture artefacts like pink skulls, barcodes saying “happy birthday” or a smiley that says “nico”. The more advanced, and no doubt more popular options, include automatically increasing the size of eyes or smile, which produces truly creepy uncanny-valley style images. This floor was packed with young girls, while one floor up the boys were engaged in a very serious looking competition in a first person shooter, camera teams and audience included.

Akahibara is also home to the famous/infamous (you choose) maid cafés. A maid café, for those unfamiliar with the concept, is a café for mostly male geeks (female equivalents exist, if more rarely), in which the waitresses dress up as maids or in cosplay uniforms. It’s not as kinky as it might sound, although I’d be surprised if more adult versions didn’t also exist. As far as I can tell from the one we visited, things are pretty harmless, if truly bizarre. To give you a glimpse, let me give you a few examples of the things I saw at the café: Several maids who greet you with “welcome home!” Some guys dubbing a home produced anime video on the big screen. A maid painting, with ketchup, a manga character on a rice omelette. Maids putting “spells” on food & drinks, for happiness or flavor or love, by three times repeating a sing song spell, along with the patrons, while making a heart gesture. Yes, we joined in, too. And of course we took a worthy maid café photo, too, which is part of the whole spiel. I’m told there are a wide range of variations on that whole theme, like a younger sister café, where guys get the older brother treatment – less respect, but more personal social warmth. A stopover to be remembered, most certainly. 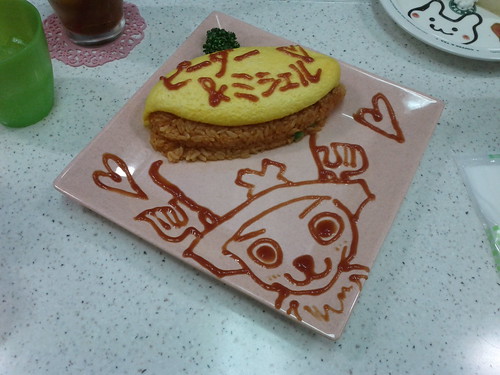 Egg omelette, decorated with a character from a popular anime series 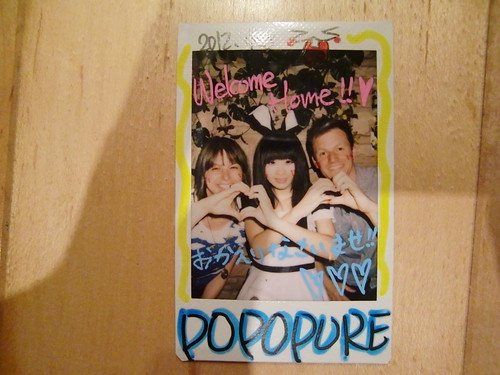 I’m quite sure that taking photos with a tourist couple isn’t usually part of the spiel, but they didn’t mind at all.

A brief swing-by at Harajuku where thousands of teens were shopping like there is no tomorrow, and we slowly meander back towards Shibuya. On the way, we stop at two absolutely lovely stores: The MoMA Museum Store, which belongs to the New York MoMA. And Pass The Baton, where individual pieces are sold along with their stories so they would be remembered. So besides its regular wares, the store allows people to put some of their stuff on sale for one month, and every single one of these items has the story on the tag, and comments by the current owner. It’s really very charming. 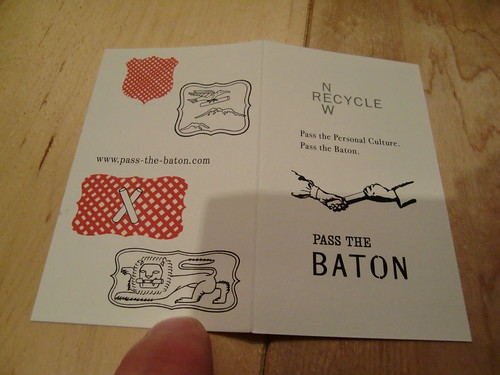 We end the evening with shared dinner at a place I’d not be able to find anymore, but which was pretty big and hugely popular. The crowd had a laid back student style, and ranged from late teens to mid-thirties. Everybody would take seats at one of the maybe one dozen restaurants and start ordering drinks and food at that restaurant, or at any of the surrounding ones. You pool some cash into a little bowl, and whenever some new food is delivered, the waiter just takes out what you owe so you don’t have to break the flow. It’s a lovely, very social setting, and many rounds of food later we were knocked out and happy.