Recently, I’ve been trying to get back to learning Go. I had dabbled a little a few years back, but then (like now) at a very basic beginner level. My friend Franz has kindly volunteered to teach me a thing or two, and ever since I regularly get my ass kicked. Which is fantastic as it helps me learn.

Note: If you’re a well-versed chess or Go player, you might want to skip this post. All these observations are from my beginner’s perspective and it’s quite possible they don’t do the game and its nuances justice. 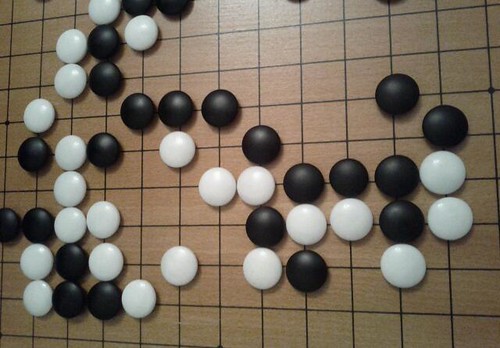 Go is a very complex, rich, nuanced game. It’s probably more strategic than chess, has a strong layer of tacticts as well, and lastly there’s a code of mutual respect to be observed. Rude playing is frowned upon, maybe more than playing weak.

Being based on a military metaphor, it’s key to figure out in advance what your goals are – the strategy for the whole field, the big picture. Digging up good old Sun Tzu, we know that the art of war is to fight wars without actually having to do battle. Now, in a game of Go you won’t get by without some actual up close fighting, yet it’s quite possible to capture large chunks of the field without a fight. That is, if your strategic plan is so good that the opponent doesn’t see a chance to break through and claim that same ground.

In that very early beginner stage that I’m in at the moment, a fair bit of the learning experience is to test the waters by trying out variations of strategies and moves, and yet lacking the foresight to play out certain scenes in my mind, there’s an element of experimentation. In other words, quite often I slap down a stone on the field to see what happens. 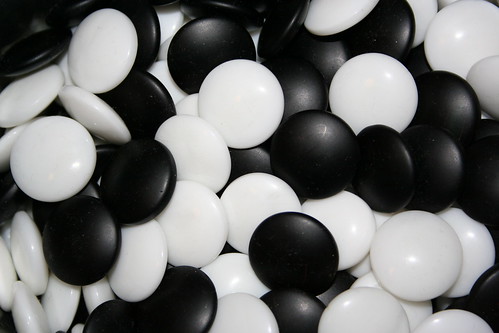 While legit to learn, one thing becomes painfully obvious: Without a thought-out strategy, you’ll invariably fail. Playing against Franz, who’s a few levels more experienced and more skilled and helps me analyze the game while it’s going on, there are some moves that have a clear intention and may or may not be played well, but their function is clear. Then there are the experimental ones, the ones where I don’t know what I’m trying to accomplish. Poking in the dark, basically. It is these moves that lead to a thoughtful frown on Franz’s face, as he tries to find the meaning in my move, where really there is none. And again, invaribly these moves fail spectacularly. (In quite educational way, note!)

Another common mistake is to be too reactive. If you’re under pressure, or if you don’t have a clear strategy that you work towards, it’s easy to fall into the trap of reacting to your opponent’s move. In many cases, though, it would be much better to follow your strategy, to be self-directed, thus increasing the pressure on your opponent. Reacting is necessary sometimes, but mostly you should be shaping the game rather than letting someone else control your moves. A clear strategy is the first step. Getting your priorities right is another.

As someone who makes a living giving strategic advice, of course I should know better than to move without a strategy. Yet, it’s a good reminder that if you don’t know the parameters or are lacking actionable information – possible courses of action, the competition, basic knowledge etc – you’re down to guessing if you don’t have someone to support and coach you. Also, often times it’s better to work out a strategy that may not look big or ambitious or powerful, but start with something you know how to handle and then grow from there. It’s often said that 80% of success is to show up; if that’s the case, then I’d wager that another 15% is to just avoid obvious and stupid mistakes.

So I’m going to continue to get my ass kicked until I get around to putting together a solid strategy from all those black and white stones, and how to connect the dots to a coherent picture. Then, using the strategy as a guiding vector, the tactical pieces should fall into place, and some battles are lost, or won.