I’m trying to find out more about these watches that I’ve stumbled upon. While I lack the appropriate terminology, I’ll try to describe them as best as I can and let the photos do the rest of the talking. 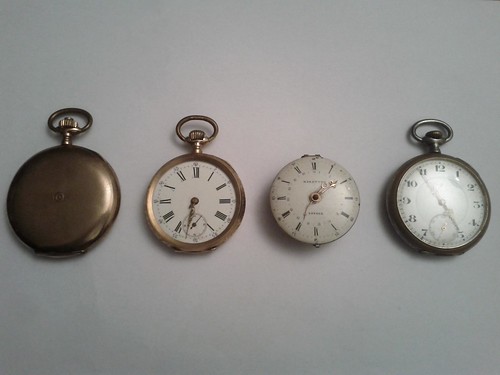 As far as I can tell, they’re from my grandfather. If they were his, or his dad’s or if he acquired them elsewhere I don’t know, and I have no way of finding out. He died more than 30 years ago just after I was born, and the watches have been in our household since, but there’s no documentation or anything.

You’ll note that most of them don’t work, and aren’t in the best shape. So this isn’t about finding any monetary value, but rather to learn more about where they come from, how old they are and if there’s anything to know about.

Below I’ll provide the best descriptions I can, plus the little I could dig up so far. If you have any pointers for me, please let me know (in the comments, or via contact form). Much appreciated! 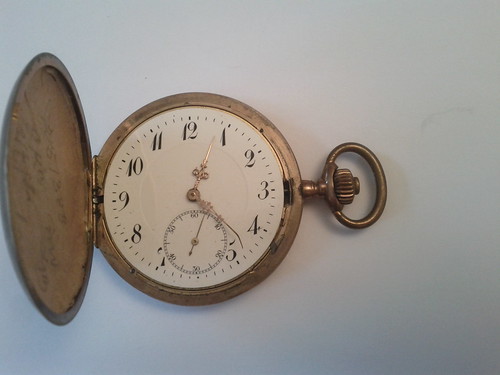 The watch is gold and has a closing lid that’s operated by pressing the release button on top. On the outside it looks like it’s in a fairly decent state, on the inside the minute hand is slightly twisted. Winding the watch up produces a bit of a hollow sound and has no apparent effect. The watch won’t run. 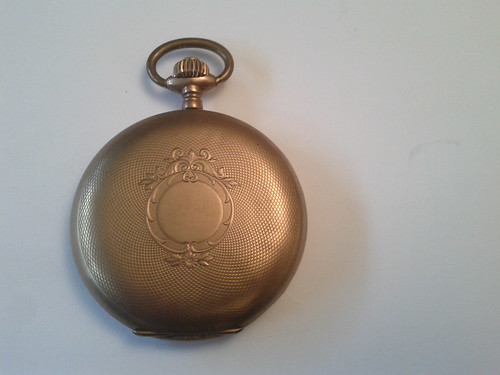 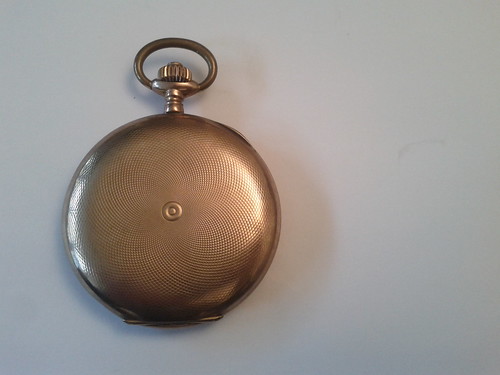 The face is labeled with Arabic numerals. Bottom center, where the 6 would be, there’s what seems to be a stop watch, or an indicator of seconds. 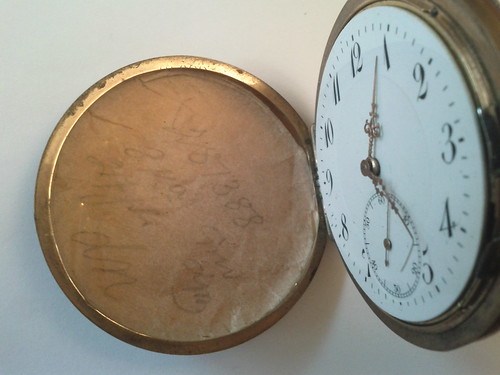 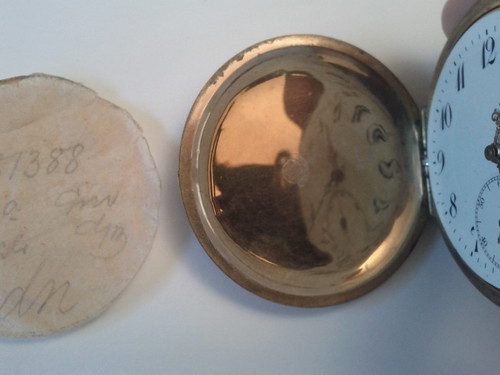 There is an inscription on the inside of the lid: Monopol, and a logo of a star with the letter D in the middle, meaning the piece is the brand Monopol by Dürrstein. The logo looks something like this:

Below the logo it says 388, which indicates the quality of the gold, and three intricate letters, MAO. It looks like there’s a tiny letter P written inside the A. 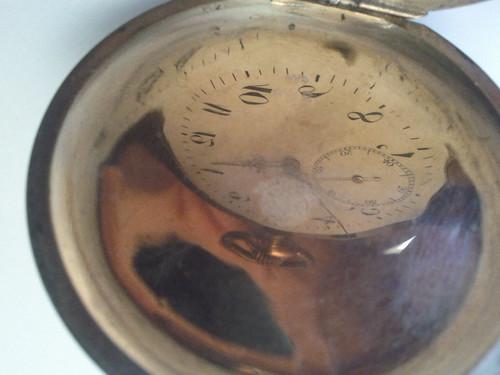 Inside the lid there was a round piece of paper with some hand writing in pen. It’s hard to read. As far as I can tell it says, top to bottom: 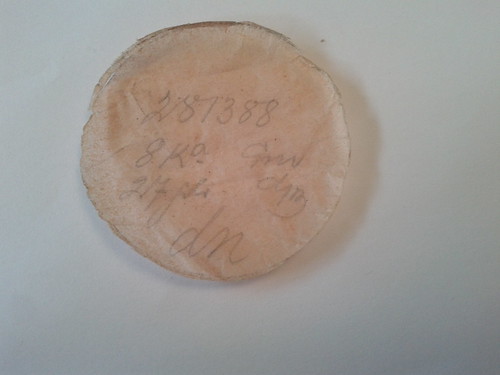 The back lid can be opened, too. Inside engravings show the Monopol D mark as well as the MAO again, plus a six-digit number: 281388. 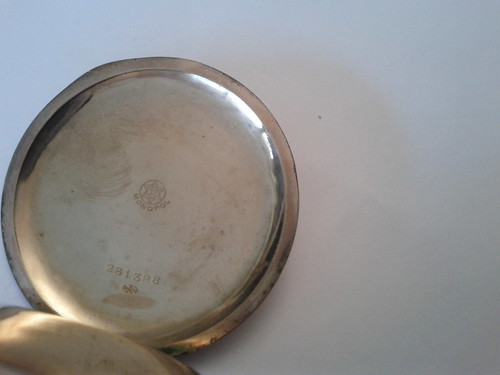 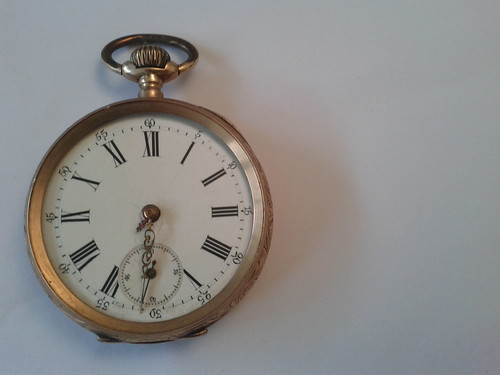 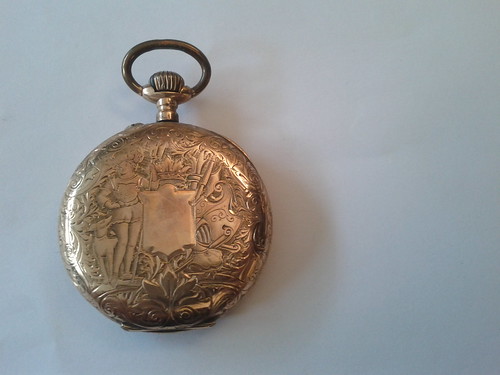 This timepiece is also gold (0,585) and heavily decorated, especially on the back. It’s in very bad repair. The front glass protector is missing, and the hour hand is broken off. The windup mechanism didn’t seem to work, however when I turned it a little into the other direction the clock would start ticking for a few moments, with the seconds hand moving.

The back of the watch shows a detailed image of maybe a coat of arms, a squire and a dog, as well as plenty of floral patterns. 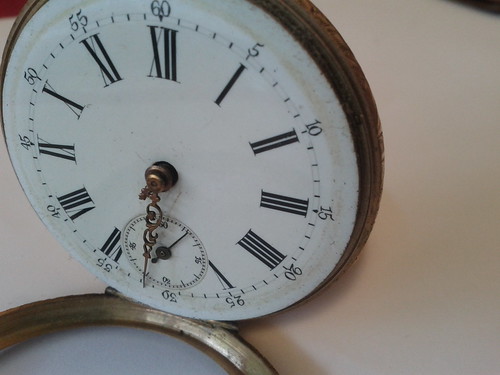 The face is inscribed with large Roman numerals as well as much smaller Arabic numerals. Bottom center there’s the seconds indicator. The seconds hand is quite plain, but the minutes hand is very, very intricate. 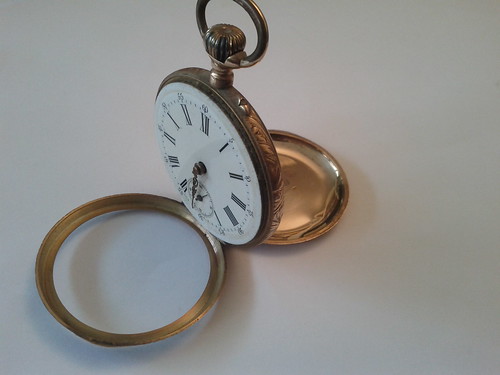 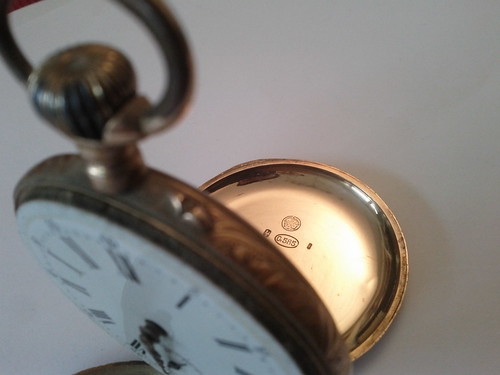 Both the front and back lid can be opened. The front once held a glass pane that’s missing now. The back is heavily inscribed on the inside.

On the back of the body itself it says, top to bottom and in a variety of fonts:

On the inside of the back lid the engravings are:

a logo of a crown inside a circle a stylized icon of what seems to be a squirrel the gold quality marker 0,585 a tiny image of something too small to make out even with a looking glass, maybe a swan? a 5-digit number: 39977 below, turned sideways, the number 6 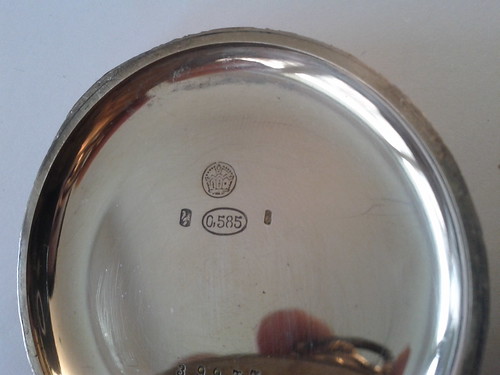 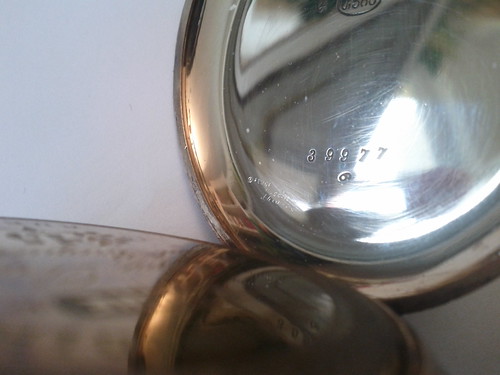 In the tiniest, tiniest writing, there are some more characters along the rim, so small that my eyes literally started watering trying to decipher it. As far as I can tell it says: 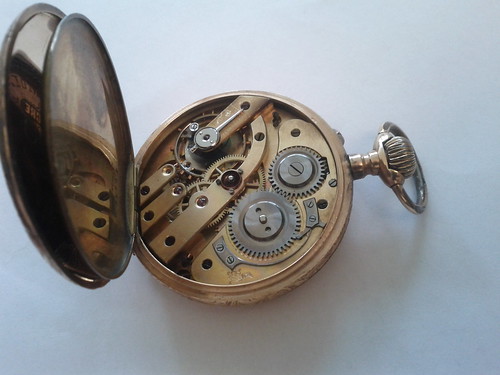 There’s a second, inner lid at the back that can be opened to access the mechanics of the watch. The inside of the lid has another engraving: 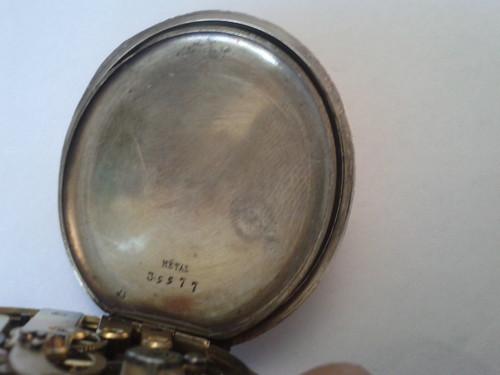 In the clock work, there’s two engraved words “avance” and “retard”, as well as an intricate little picture that seems to feature the letter B and a parrot. 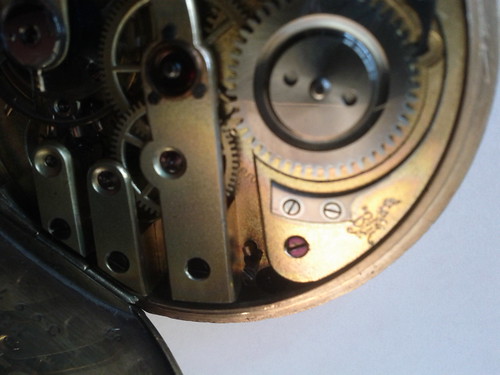 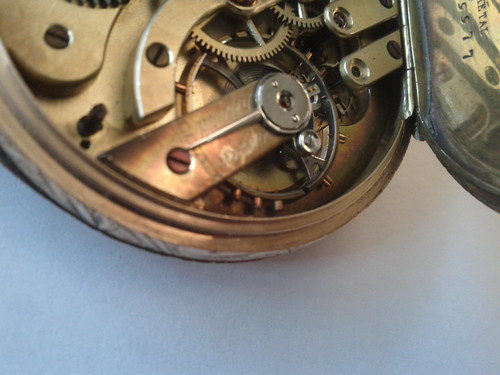 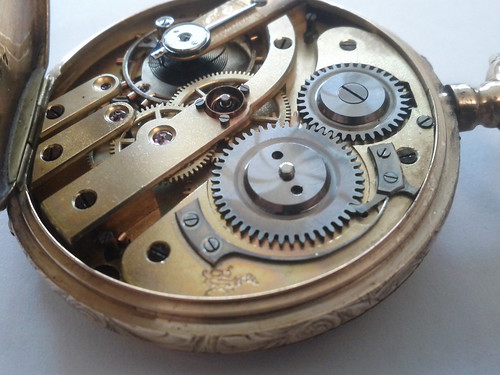 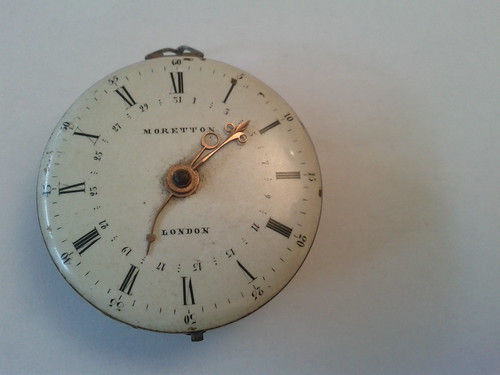 This one is probably the oldest of the bunch, and not complete anymore as some of the body is missing. It’s relatively small and labeled as Moretton London. 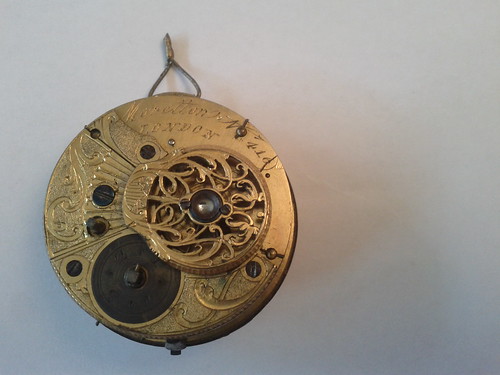 Since the body is missing, the backshows parts of the mechanics, which are quite intricately designed. The maker is engraved on the back, too: “Moretton London No 416”, as well as on a darker disk the numbers 1 to 4. Also, you can look inside from the side. 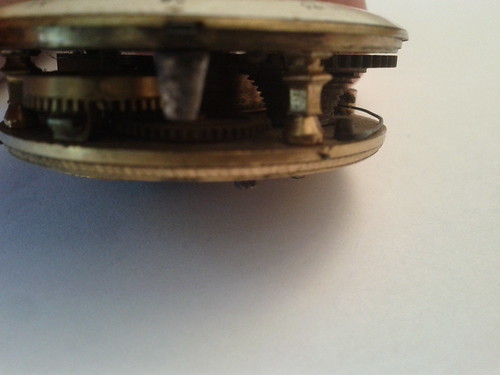 A first internet search brought up next to nothing about watch maker “Moretton”.

No 4: Crescent and Crown 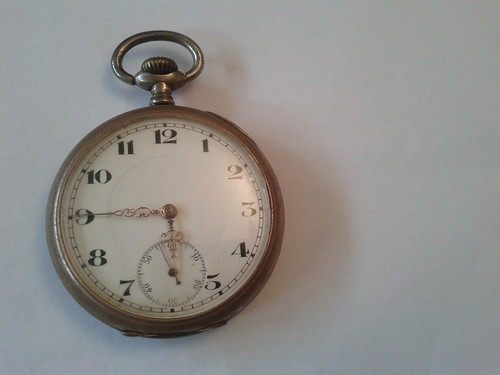 The probably newest of the bunch doesn’t seem to be marked by the maker, or at least not by a prominently featured brand. It’s silver, and much more modern and simple than the other ones. The font on the face is somewhat more playful and features Arabic numerals only.

Out of the whole lot, this one is by far in the best state of repair. When I wound up the clock it started ticking right away, and for the few minutes I’ve been checking it seems to keep the time.

The front lid holds a glass pane for protection, the hands are quite intricate.

The back lid shows a simple pattern with a blank coat of arms in the center. 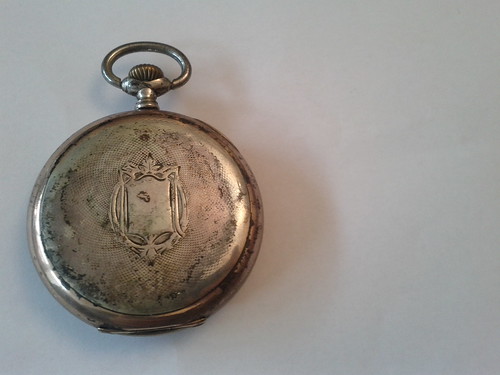 The inside of the back lid has just a few small engravings spread out across the lid:

AD a tiny image of maybe a peacock, an ostrich or some other animal (too small to tell) a silver mark (0,800) an image of some sort that’s too tiny to distinguish a logo of crescent and crown the number 165473 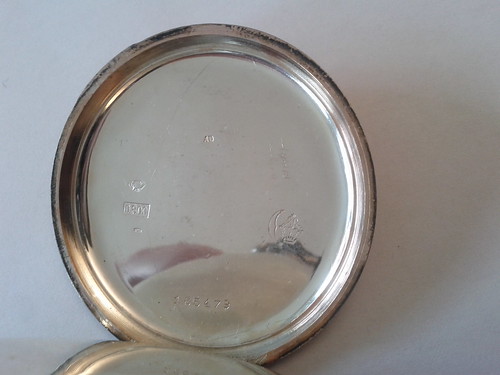 Then, in even finer engraved hand writing: 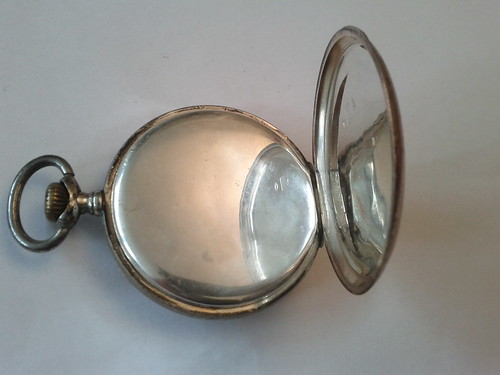 Inside the inner back lid, the mechanics looks much simpler and more modern than the other watches, with only minimal decoration and engravings. (F S and A R) 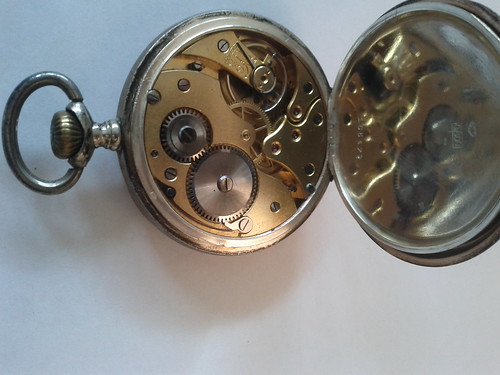 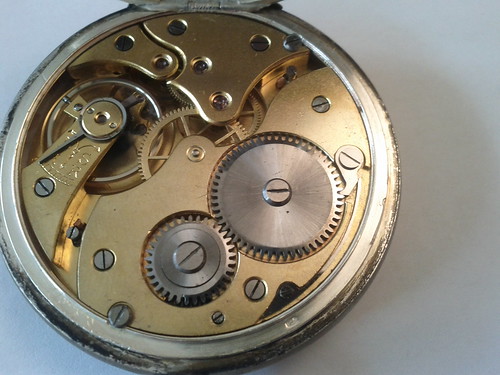 That’s all I have so far. If there’s any good resource that I could dig into, any recommendations are welcome.

Update: A big thank you to John Biggs, who helped me out with some background on the watches. They seem to be pretty basic turn-of-the-century watches. Also, before I hadn’t known that they used to sell the cases separate from the movements, so you could buy cheap movement and put it in a more expensive case.