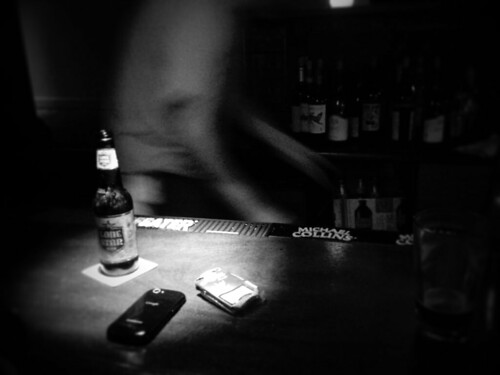 Over at the New York Times, there was an article the other day: Out on the Town, Always Online. While curiously sparing out most attempts at digging for deeper explanations, it shows and discusses how people have become used to permanently be connected through their cellphones. (Note that I’m trying to avoid any generational reference.)

To any of us, the folks who are out and about and won’t hesitate to reply to a text message or a tweet during dinners, conversations or on subways, the article doesn’t really explain anything new. However, there are a few nuggets in there, and a few points certainly worth discussing. At the very least, it’s a discussion we’ve all had many times – I certainly did, with family and more offline friends alike.

That behavior, the never ending multi-tasking, of course has a name, too. The Japanese refer to it – to us – as the Nagara Zoku, the Multitasking Tribe.

And there’s a fair bit of potential social conflict in this where other tribes are involved.

I’m being social, just not with you

“I don’t think of what’s here and what’s not here as separate,” he said. “Like I’ll be out with my mom and if I look at my phone, she says I’m being anti-social. I say, ‘I’m being social, just not social with you.’ ”

For us, that’s normal. Hey, I’m not less engaged, but more so! Only, it’s not easily apparent for everyone outside, well, our heads. After all, as often as not reaching for our phones isn’t with social intent, but with the intent to cocoon, to tune out for a moment, or because we’re bored of the conversation.

Either one of which is legit, but we easily send the wrong signals.

Participate in the future before you build it

Most of this potential conflict is part of a change process. Protocols change, and quickly. Says Spencer Lazar, founder of mobile startup Spontaneously:

“I get away with it more than other people because of the industry I work in. I try to adopt behavior that will reflect the way the future will be. It’s important to participate in the future before you build it.”??

The future etiquette is here, it’s just not evenly distributed yet. We see that every day, and there’s a crass difference between having dinner with our families (“Can’t you put your phone away for a minute?”) and our peer group (“Have you checked in on Foursquare yet?”).

For me personally it’s a matter of great personal interest to watch how etiquette and behaviors change, and it has even become part of my job. What’s not to love about it?

The rule of the trajectory

Curiously, the New York Times article notes that evening plans for one of the featured couples are “vague”. If anything, planning social activities seems to have gotten much less of a pain compared to when I was a teenager – And I’m almost sure it’s not exclusively because I don’t feel as akward now as back then.

Where a few years ago, you’d need a more or less rigid schedule, now a trajectory is all you need. No more meet at Bar X at nine. Instead, we’ll leave at 9, join us when you’re free, you know how to find us, and we’ll take it from there. A state of flow instead of a rigid framework. It’s in flux, both in terms of activities and group members. And this makes it more open, more social, more participatory.

And I wouldn’t trade it for anything.

After I had rendered my smartphone useless a few months ago by dropping it (one last time) on a stone floor, I decided not to replace it. Mostly because of how my friends and family (all of them more or less offline, as you call it) reacted to it. I now have a bet running that I can stay offline (I.e. without a smartphone) for the rest of the year. After being through it for nearly three months, I have to admit that I see more pros than cons in this (even taking aside the bottle of wine I will get when I win this).

For one, I am much less stressed than before. No more checking-in, no more sharing, no more taking pictures of something I want to share on the go, no more having to reply to messages while eating, no more just having to look up where I know this or that from on the web, etc.. And being less busy with documenting my life for others, I now actually can appreciate moments that are there just for me and the people I experience it with.

Hey André, this actually is a good point – I’d go out on a limb here and say that this only holds true once you were there and – like in your case – emerged on the other side of the equation, if you know what I mean. If you were used to be always connected and then chose to stop is a very different situation than if you never had it, yet judge (or feel insulted by) people living that way. Either way, going offline occasionally on purpose surely isn’t a bad thing, and no matter how you decide after your experiment, best of luck winning that bottle of wine! Speaking of which, are you planning any trips to Berlin anytime soon? It’s been a long time since we last met!

It sure has been quite some time! I am working shifts at the moment (and will continue to do so till September), so while I do have my regular share of days off, they half of the time aren’t in the weekend. Since my girlfriend has to go to university during the week, that’s making things a little complicated. I hope things will get easier next year when I’m at least done with learning for my specialist training. What about you – will you be in Hamburg in the predictable future?