If you follow this blog or my company Third Wave, you know that we keep trying to find the best way to frame what we do and how we work. Recently, a blog post hit a nerve, in the best sense – here are some early thoughts on this, as a sketch and reminder for myself more than anyone else.

Back to the blog post I mentioned: The great Ben Hammersley with his uncanny talent of phrasing things just right described his own role as that of a translation layer.

In the time of revolution, and believe me this is a revolution – easily on a par with the renaissance, or the Enlightenment – the translator has a very important role to play. The communicator, the person who makes the facts palatable to all sides, is the only conduit through which real change can be made.

I fully agree with Ben when he stresses the absolute importance of this role. This is a way of framing his role that I think describes our work very well, too. In Ben’s example, the translation serves to bridge a generational gap, and in a political context; It could of course be framed in various other way, too, as there are other segments/layers/parts of society (vague, yes, I know) that need to be connected through translation layers.

I’m thinking that we (meaning Third Wave) act as translators at mainly two points on that adoption curve: 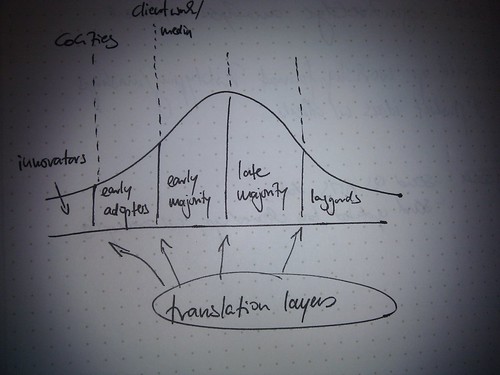 We dig into emerging topics and surface innovators and their insights, explore their thoughts, and try to make them more accessible to early adopters. This usually is not connected to client work, but driven by interest, curiosity, and a desire to understand the change we should expect through technology. This is where I’d pinpoint Cognitive Cities Conference, where we invited a whole bunch of really smart people to share their ideas and thoughts. This is also where our digging into the Quantified Self, Internet of Things, secondary screens and many other far-from-mainstream topics come in. This is also the stuff we like to explore in conference talks and workshops, like our workshop at PICNIC yesterday.

Then, one step over on the adaption curve, comes our client work: helping companies understand and harness this change. In other words, we look at commercial use, or at disruption, or at staying competitive in some way or another – either on the organizational or on the team level. This is also where interviews and articles as well as talks at more mainstream conferences come in.

(As far as I can tell, we haven’t really worked in any of the other two segments.)

ps. Thanks to Boris for a nudge in the right direction!