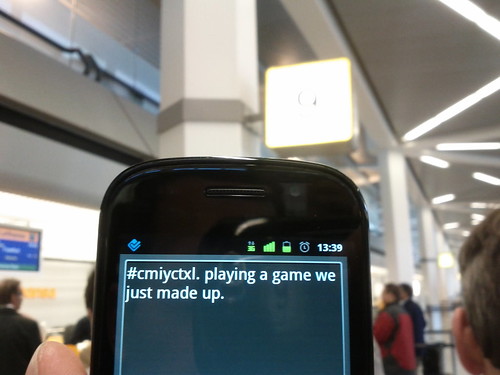 Chatting with Michelle and Igor, we figured that there must me a way to make staying at airports less boring, potentially even more fun.

Initially we wanted to go for a scavenger hunt of sorts, where players would hide stuff or leave stickers. We dismissed both – hiding stuff at airports might get airport security staff involved in unpleasant ways, and stickers might just be removed too quickly. After all, we all travel a fair bit, but not every day.

So here’s a first draft for a simple, open, collaborative game to play with friends who spend too much time at airports: Catch Me If You Can, or #cmiyc.

The rules are simple.

If you want to start a game, take a picture at an airport – any airport – and upload it to Flickr, tagging it (or at least naming it) with #cmiyc followed by the airport code: For Berlin Tegel, the tag would be #cmiycTXL, for New York JFK it would be #cmiycJFK, for Los Angeles it’d be #cmiycLAX etc. If possible, also check into the airport on Foursquare, because geo location never hurts.

If you want to join an existing game, just go to Flickr and search for the CMIYC tag of the airport you’re at. You’ll find one or a series of photos. Find the scene shown in the most recent photo, and take a photo of what’s exactly to the left of this last photo. (This way, the way Flickr sorts the pictures chronologically, it’ll look a bit more like one big panorama photo.)

Currently, as far as I can tell, there are two ongoing games that we just started. One is in Berlin Tegel (#cmiycTXL on Flickr), the other in Frankfurt Airport (#cmiycFRA on Flickr).

Obviously, in the best case there’s only one ongoing game per airport, and some stuff will not work. But it sounds like this might add some fun element of discovery to our travels. Feel free to join!