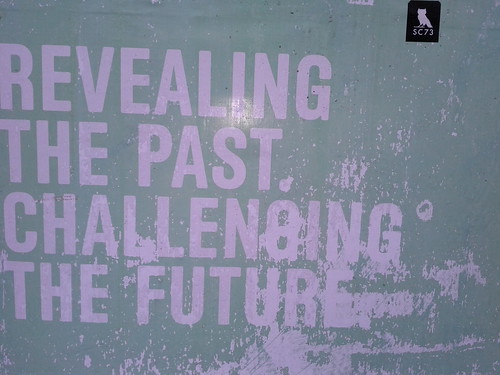 As confusing headlines go, this one is hard to beat. Extra props for reading on anyway! So it’s been about a week since I got back to Berlin after a trip that felt much more longer than it really was, simply because it was pretty intense. We met up with a whole bunch of awesome, inspiring folks in NYC and Austin, soaked up some Texan sun (quite a relief after Berlin’s seemingly never-ending winter) and even caught a few panels at SXSW – which was huge this year.

Footnote: My long-held theory is that all recurring festivals/conferences/events trigger a certain reflex in all the attendees who go there at least twice: that last year was much better, much less sell-out, much more inspiring and intimate; that this year is basically too mainstream and kinda more-of-the-same; that year one (if you happened to be there in year one) was the ultimate love fest but can never be brought back; and that next year is going to suck royally. And that this reflex influences everybody’s perception, ever. SXSW is no exception. So instead of spelling it out, allow me to refer to this paragraph for my impressions.

But kidding aside, yes, SXSW is huge (20-25K attendees, depending on whose numbers you want to believe), yes, it’s over-sponsored, and yes, it’s a bit of a cliché, and yes, panels are a relatively weak as a format as opposed to a striking key note speech. But none of that is new, and it’s still perfectly fine: I go to SXSW because it’s where you get a chance to meet a lot of fantastic people. If you don’t, you might reconsider your tactics next year. Plus, where else can you get BBQ and a sunburn while at a tech conference? (For a great impression on what SXSW actually feels like, I highly recommend reading these 11 SXSW short stories.)

So Igor, Johannes and I are regrouping in Berlin for the first time in three or so weeks with our heads spinning (what with Cognitive Cities, NYC, SXSW and all), trying to plot out the trajectory we’d like to aim for with our next steps. There’s going to be quite some news, as soon as we decide on the next concrete steps.

One thing that’s been kicking around for a while, but was really re-triggered by seeing Stefan Wehrmeyer‘s Moving Dots campaign, is a transportation hackday of sorts for Berlin. All terribly vague at this point, but I’d love to see one happening. That said, if you know a techie working at BVG – aka the guy in the blue shirt – any pointer would be greatly appreciated.

Long story short, we’re all back in Berlin. And while the next trips are already lined up, we’ll be around for almost a couple of weeks uninterrupted, plotted and scheming. See you around!

Footnote: I’m typing this on my old backup laptop after a burglary and an awkward water incident; Switching from my Mac to this old Sony Vaio running Ubuntu, it’s weird to notice very different pain points. Mostly though, it makes me realize how absolutely customized our computers tend to be. More than the operating system, it’s all the little tools and tweaks that I’m really missing. Hurry up, UPS!