Today I saw something awesome: A wallet made from bioplastic, all more or less cooked up at home. The whole thing was created from scratch with nothing more than some very basic material (starch, vinegar, that kind of stuff), and a lot of experimenting. 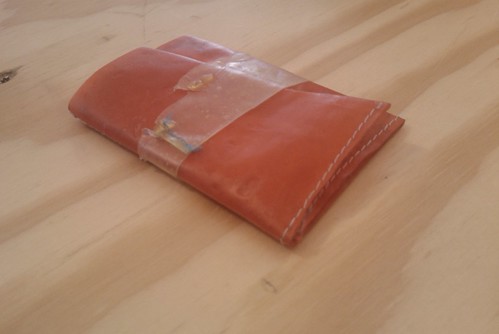 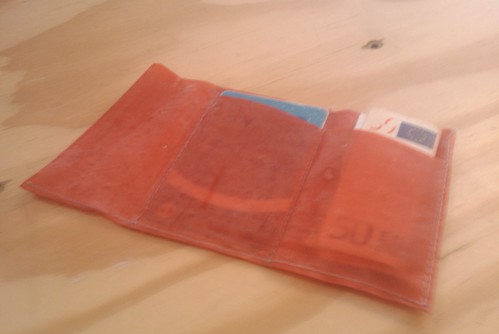 So what’s the background here? Jay Cousins, tinkerer extraordinaire and co-founder of Open Design City at Betahaus, has been experimenting with bioplastic for awhile. (Hint: it doesn’t take more than water, vinegar, glycerine and starch to make some yourself.) (Correction: No lasers were just to cut this wallet. It’s all good old scissors-work!) (Watch two videos about open design and bioplastic.)

This is just the start of course. What Jay and the crew are building at Open Design City is absolutely stunning. With a maker bot, 3D cutter, a laser and some tools they will be able to prototype quickly, discover and share incredibly interesting knowledge and really democratize the means of production. It’s the next level of DIY, and (as is obvious from this post) I’m hugely excited to watch this whole thing.

It’s going to be interesting to see how both the community part and the business aspects will work out; I’m assuming that will take some tinkering, too. I don’t think there are many places like this in Europe; if there are, please share them in the comments or drop me a line.

Until then, I’ll try to get Jay to help me make one of those wallets.

PS. No, the wallets aren’t for sale anywhere yet. If you’d like to get one, or make one, it’s best to get in touch with Jay Cousins.

Update: After Jay showed me his walled I got carried away and posted photos, which I also submitted as a link to boingboing. Now there’s three things I’d like to add: First of all, my apologies to Jay for now talking this over with him first; as I said, I got carried away, but it would have been much smoother if I had asked him for a good link to send the boingboing readers to. (Sorry Jay – please take it as the compliment it was meant to be!) Second, I had assumed that the wallet was laser-cut. As Jay clarified in the comments, the wallet was actually cut with scissors. But hey, it’s still basically a cooked wallet ;). Third, Jay announced a workshop (Thursday, 7pm) if you want to make your own, and you’ll be able to order a custom-made wallet soon. For details, please follow Jay on Twitter.

Update: With Jay’s help I just made my own bioplastic wallet.