SXSW is over (has been for a few days, in fact) and I’ve settled back in. And it was a blast. I heard some people say that last year it was better. And while I have no reason not to believe them, last year has always been better – at least when it comes to conferences, concerts, festivals. Since this seems to be an issue particularly if last year was that person’s first year I decided not to let that bother me, and I’m sure I’ll be saying the same thing next year.

And that’s the point, really: I’m fairly sure I will be going back to SXSW next year. Because no matter how much it has grown since last year (supposedly 40%), how much more commercial it has turned, how many self-described “social media gurus” have shown up (too many): it is a great event and unlike many conferences I’ve been to in the past.

My travel buddy Igor and I discussed this at length, and both came to the same conclusion: SXSW came in as a solid 2nd in my personal conference rating, right after reboot. (And that’s hard to beat.) SXSW is a great mix of top-notch speakers and an intimate atmosphere, and since its rooted in a music festival the atmosphere is more relaxed than at most conferences.

And in between discussions about social media in Europe and collecting wireless passwords from all bars along 6th street, and (first and foremost) meeting a whole bunch of great folks – there was also a thing called sessions. Sadly I couldn’t find a complete set of full-length videos, and never got around to writing the summaries I had intended to write. But I’d like to highlight one of them (for the second one, Bruce Sterling’s talk, I can’t find a link).

Danah Boyd talked about privacy, and this is a must-read/watch. (Brief video outtake below, full-text speech on Danah’s blog.)

I’ve read a lot about “social media gurus” all over the net today, seems like people are really noticing this new “elite” group of “experts.”

Just this morning saw this video on YouTube and had a good laugh: http://www.youtube.com/watch?v=ZKCdexz5RQ8

Haha, very true. Here’s a slightly sarcastic venn diagram i made as a reaction to this (pretty good) blog post. 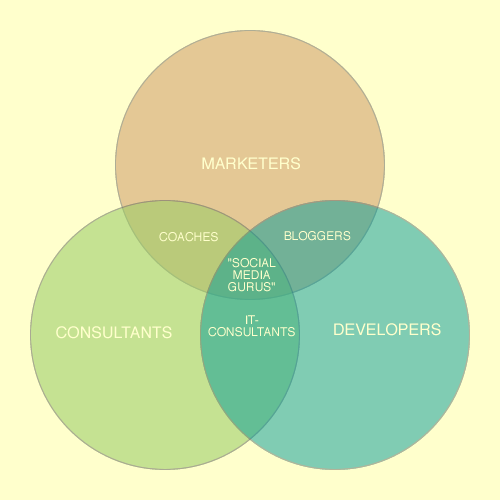