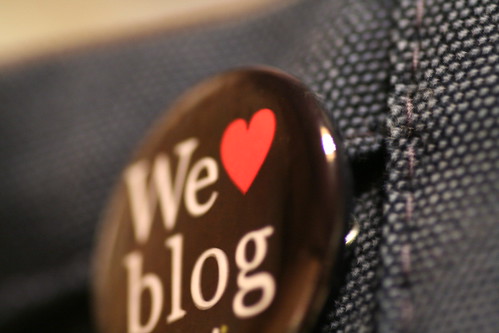 In the olden days you used to hear blogs being compared to lovers – blogging was perceived to be an intensely personal, sometimes intimate thing, and the relationships between bloggers was pretty intense. Now, of course that kind of romanticizing was somewhat over the top. There was a small number of bloggers in a vast internet, so they stuck together.

However, there is something to this romantic notion. I’ve been noticing that my relationship to blogs has changed. More and more I’ve been perceiving them as something to deal with in a professional context. That’s not to say I’m not as passionate as blogging as ever, but it changed. Also, with so many more blogs around, attention is spread thinner – and many great blogs don’t get the attention they deserve.

I’ve been neglecting a few blogs that I dearly love, and that whenever I visit them, I find most inspiring. Some of them I would even read not in my feedreader but on their own website, for celebration’s sake, so to speak. So I’d like to introduce a handful of blogs that I’ve always liked, and that I’ve been neglecting. And I’d like to encourage you to do the same: a small selection of hand-picked, author’s recommendation-style blogs.

Digitalien This is where it all started for me. The German Sofa/Digitalien was a collection of short stories, not called blog then, but very blog like in it’s overall appearance. (It’s abandoned but archived under the domain sofa.digitalien.org, the blog now lives under arrog.antville.org.) and the authors were some of the first in Germany to actually switch to blogging and to discuss the whole affair as it was emerging. Praschl and Knecht experimented with form and content, interpreted both, applied it in often very personal ways. It was always a joy reading, a glimpse into someone else’s life, an inspiration to be part of this whole blogging thing. They would have never called it a movement.

Jan Chipchase / Future Perfect Jan Chipchase (real name!) is a researcher for Nokia. In his blog Future Perfect he shares some insights on his research on digital lifestyle. Sounds boring? Think again. Chipchase leaves his lab and goes straight to where the real innovation is made this day: the favelas of the world where bootstrapping and improvising and hacking is the default mode. He talks to the folks there who hack their phones to meet the needs of life as an Indian taxi driver or maybe the expectations of a 15-year old in Shinjuku. More companies should be giving budgets to awesome researchers and allow them to blog. Just as I’m typing this the most recent blogpost reads:

Today’s office involves a few hours stopover in Dubai, then a 3am flight to Kabul. The upside of sleeplessness? Watching the dawn over Afghanistan turn from glimmer on earth’s curved surface to the dusty, arid warmth of the mountains below. The next few days an opportunity to map the movement of the city since the last visit, a plethora of interviews and reconnections, Insha’Allah.

This may give you a rough idea of what Jan Chipchase is upt to. It’s always fascinating.

Danah Boyd / apophenia Danah Boyd blogs under the domain Zephoria.org, her blog is call apophenia. According to Wikipedia, apophenia is “the experience of seeing patterns or connections in random or meaningless data”. I’m not sure the blog name is all that convincing – after all, Danah doesn’t really dig around meaningless data but instead blogs about her very concrete scientific findings, mostly around the way youth use social media (in the more narrow sense) or (in the wider sense) how youth construct online identities. (Of course, you surely shouldn’t let the blog name get in your way.)

Like Jan Chipchase (above), Danah Boyd is a scientist who by now is on the payroll of a major corporation to fund her research. She works for Microsoft Research New England and is a Fellow at the Harvard Berkman Center for Internet and Society. That shouldn’t deter you, though, as she still shares a lot of research results. Never dry, always compelling and very often thought-stimulating or even mind blowing. Whenever I go to her blog, I can be sure to spend the next hour or so digging around her site, it’s that good. Definitively a keeper.

Bruce Sterling / beyond the beyond Bruce Sterling has been a hero of mine for a long time. (I most recently sung his praise after reboot11.) If there’s any place he outputs regularly besides the WIRED/beyond the beyond blog, I’m not familiar with it – so this is it. In his very particular, weary-yet-wary way he formulates incredibly deep, complex thoughts in a way that usually takes me a few days to process before understanding what he’s even talking about, but when the thoughts eventually sink in, they usually trigger some profound thought process in me in a way few writers do. The blog itself isn’t always so great, but when it shines, it thoroughly does. And it is, as far as I know, the best place to catch a regular dose of Sterling.

Anthony Volodkin / faßcinated Anthony is one of the minds behind the wonderful hypemachine music discovery service. On his personal blog faßcinated, Anthony does just what blogs used to be about: he shares personal thoughts and little snippets of stuff he finds online. It’s not overly deep and often banal, but in the best possible sense of the word: Little glimpes into someone’s day-to-day live, written and shared with a lot of love, occasionally with his take on contemporary Russia. (He was born and raised in Russia, now lives in New York City.) I know Anthony only very superficially, but his blog seems to perfectly capture and reflect his very curious, passionate and open-minded personality in a way that’s, well, just fun to read.

Yay!Everyday! I wasn’t sure if I should include Yay!Everyday! in this list. For one, it’s not technically a blog, but rather a collection of photos. More importantly though, it’s not Yay!Everyday! I wanted to highlight, but Yay!Monday!, which is by now defunct (or so it seems). Yay!Monday! used to be a weekly dose of inspiration a la ffffound, but for Mondays only. (In fact I have to admit I can’t really tell how they’re different, if at all.) So this shouldn’t be part of this list. Then again, this is all about inspiration, so let’s not be too narrow-minded, eh?

What else? This list feels terribly incomplete. But that’s the nature of neglected blog reading lists, by definition important blogs get forgotten. So I’ll take the liberty of updating this list when I remember another blog that I’ve been neglecting and that should be featured here. Until then, I strongly recommend you check out the blogs above. I promise you won’t regret it. Enjoy!

something changed something changed is not even a real blog. It’s a tumblelog. It’s written by a certain Jessica, who doesn’t give away her family name (not even in interviews), or her exact job (she only says she works in advertising, until recently in Sydney, now in Melbourne). In other words: I know practically nothing about the author of this blog. And yet, it’s full of smart, inspiring quotes, thoughts and ideas. I never leave the site without something new and refreshing on my mind. And what more can you possibly ask for?

Photo by kunel, Some Rights Reserved.