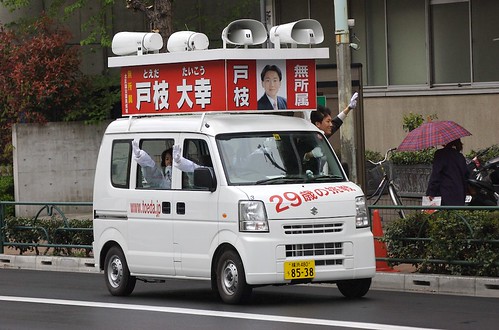 Just broadcasting with more & smaller megaphones: Not the way you want to go.

There’s one good thing about the live-streamed and much discussed Vodefone press conference where the telco presented their new brand strategy: We have another good example to discuss the relationships between companies, brands, social media and advertising.

For those who haven’t been following the discussion, here’s the short-short version: Vodafone are re-branding themselves. Hired to help them is Scholz & Friends, a large ad agency. From now on, they target what they call “Generation Upload”, the new generation of consumers that’s always on and shares their stuff online. Also, Vodafone now wants to treat their old, trusty customers at least as good as new customers.

Anyway. Back to the point. Thomas pointed out:

[…] Scholz is an advertising company. They are not business consultants. And social media won’t change that. They talk to marketing directors about ads, not about products. They might talk about products over coffee, but they will never change a companies behaviour. Claiming to do so, claiming to listen, claiming to put the customer first and then not living up to the expectations is worse than not even rise all sorts of expectations that can never be fulfilled.

This really nails it: You can’t just use social media for marketing and advertising and hope that anything will change. It won’t. Not a single one of your company’s problems will be solved, not a single customer more happy with you. (Your management might be happy ’cause everything seems new and hip, but this shouldn’t be the benchmark.)

Social media – and more importantly, underlying principle of dialog with your customers on eye level – requires a corporate culture, and structure, that allows for dialog. Requires it even! In some areas, that’s perfectly normal and doesn’t require a large change: If you buy clothes, you can always expect that the sales person will talk to you, particularly if it’s a small owner-run business. Nothing new there.

For larger corporations, sometimes it’s not as easy. They need to change. A lot. To change, you don’t hire an ad agency.

(Although some common sense might come in handy, as Johannes points out.)

It’s a problem many companies have, it’s hard to figure out who to hire to help you navigate this weird space that’s called Social Media. (I’m not pitching my services here – I’m just a one-person outfit, not in competition with said large agencies, although I sometimes work with them.) Instead of ad agencies, hire business consultants. Let them help you. (If instead you still want to hire communications consultants of any sorts, be prepared to change after their advice.)

(Edit: If you’re an ad or PR agency, here’s your part of the deal: If you offer social media services, make sure to negotiate the privileges required to change your client’s company, not just their image. You, too, face a very different challenge than a few years ago.)

It’s not about finding a new wrapping for your old dusty product. It’s about inventing a new product. Maybe that requires tearing down your old factory and building a new one.

Just for completeness’ sake, here’s a screenshot I took today (almost a week after the press conference) on the Vodafone website: 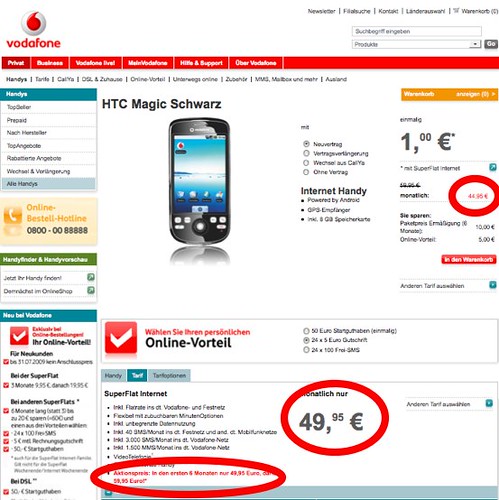 Screenshot: A Vodafone offer touting a smartphone and the “SuperFlatInternet” plan (not a real flatrate)

Not only is it – as far as I can tell – not a new product, but it’s also a prime example of intransparent, misleading pricing. (Quoted prices: Monthly 44,95; monthly 49,95; monthly after six months: 59,95.) And there’s not a trace of a true internet flatrate.

Not following up on new announcements: Bad. Also, another example Why The Telcos Are Doomed.

Update 16 July 2009: Point in case, Laura Porto Stockwell over at Digital Dialogs came to the same conclusions and has a neat Forrester report to back her up. (via Johannes)

Thanks for the plain words, absolutely true. There’s still too many people that say “Uuuh, let? do a blog” or “Wow, let’s do twitter” and have no clue about the serious, long-term investment which is much more a cultural than technological re-learning…