Over the last few months, we’ve been working hard on relaunching Blogpiloten.de, best described as a German blog magazine that has been around since 2006. (Full disclosure: I’m project lead for blogpiloten.de.) Today around noon, the new site went live, and I’m really happy about the way it turned out, for several reasons. 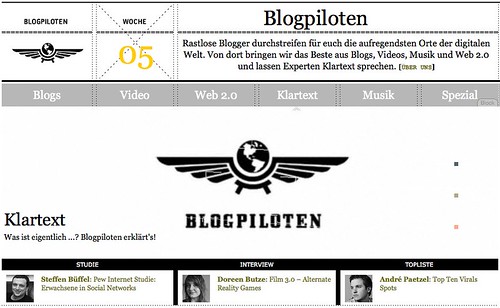 What doesn’t quite come out in this screenshot is the massive place we reserved for video. Our video on the startpage is some massive 870px wide. Awesome, eh? There’s also some kick-ass video content, namely a series called “Klartext” (translates roughly: “in plain German”), where we ask bloggers and other experts to explain web terminology in a really easy-to-understand manner. (The cool new trailer came from Hobnox, by the way!) Internally, we go by the rule of “no tech arrogance”. (Yes, we really even call it that ;) There’s enough folks out there hiding behind tech speak. We’d rather go out there and help interested newbies get into the game. I hope we’ll be doing a good job.

Two, I found it very interesting and cool to coordinate this relaunch between quite a lot folks who were spread out all over the place. There were two agencies – working from four locations – involved in the design process (Fork for the design, Hobnox for the video trailers). The coding was done at Netzpiloten HQ in Hamburg. Managing editor Steffen Büffel is based in Cologne. I’m in Berlin, most of the time. That’s a lot of folks, and a lot of loose ends to connect. It’s a great team, too, and a good learning experience.

Three, I’ve worked with Blogpiloten for quite a while now, so naturally I’m really curious to see where we can take it. I’m curious about your feedback. If you have an opinion on Blogpiloten.de, please share!