Usually I don’t get interviewed often, but rather interviewing others, like for Berlinblase or Blogpiloten. So you can imagine I was pretty surprised to show up in two traditional media yesterday.

A brief, but fun email interview with the New York Times about likemind (which I had the chance to co-host recently – thanks Henrik!) got me a quote in the NYTimes Fashion & Style section, ranting about professional networking:

TO Erin Middleton, a 27-year-old brand strategist in Dallas, the word â€œnetworkingâ€ calls to mind â€œstodgy business types in suits,â€ who are â€œvery uncomfortable and poor at engaging conversation,â€ she said in an e-mail message. Melissa Clark, an advertising account manager in Minneapolis, said there is â€œsomething smarmyâ€ about the word. Peter Bihr, 28, a media consultant in Berlin, was even stronger in his denunciation. â€œ â€˜Networking,â€™ as a word, makes me feel like I get a physical reaction, I hate the term so much,â€ he wrote in an e-mail message. â€œIt sounds all like strategically talking to people and trying to be their friends. Itâ€™s not authentic.â€ So, what exactly, are these three doing at 8 a.m. on the third Friday of each month, meeting with other young professionals at their local coffeehouse? They are participating in likemind, a monthly kaffeeklatsch for creative professionals, held in 55 cities around the world, including Mumbai, SÃ£o Paulo, Shanghai, and Malmo, Sweden.

The article is a fun read: That Business Card Won’t Fly Here.

Then, Saturday evening I was invited over to Potsdam for an interview with Radio Trackback to chat with Marcus Richter about Web 2.0 Expo, Barcamp and, most of all, our collaborative content mashup Berlinblase. This was, I think, my first radio interview, and I loved the atmosphere in and around the studio. There’s not much going on at the station’s grounds, so it’s very calm and quiet, and everybody was quite easy-going. Anyway, you can listen to the interview here (roughly seven minutes from 5:40 to 12:20).

Also, here’s a pic I took while we got ready (more here): 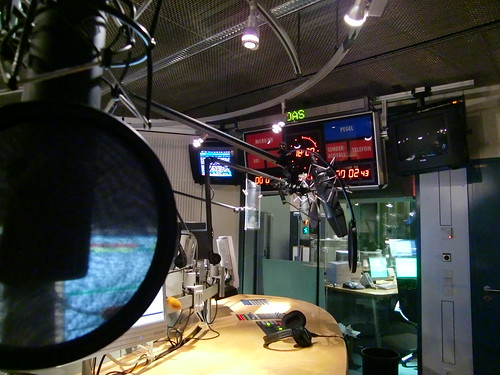