This has been some crazy week for me. Starting last Friday, there has been no day, and no evening, without some kind of web-related event: Barcamp, Girl Geek Dinner, Web 2.0 Expo. And all the events surrounding those, like Pitchparty, LateCrunch and of course the “official” Web 2.0 Expo party. Which is why I took a break this morning and went to go see the least webby thing I could think of: The Pergamon Museum, Berlin’s archaeological highlight. Nothing gets you back to the ground like some huge chunks out of historical buildings dating back to A.D. times. That, and some sleep to get over the sleep dep.

So why am I writing all this? Partly to have a decent wrap-up for all the things that happened on the web and off. Partly to look back on what happened and what I found remarkable. Also, I think criticism is important, but so is paying respect where respect is due. So this is highly subjective, you might have had a very different experience at the same events. (If so, please share!)

I had a great time connecting face-to-face with all these folks I usually interacted with primarily online. (Only occasionally did I encounter awkward conversation like: What’s your name? Who are you on Twitter? I think I’m following you!) This is what community events are so important for: To get folks together in the meat space. It really makes a difference. There’s so many projects, startups and cool folks around, we should try to get all of those groups connected even better.

So here are some thoughts on the web events themselves. 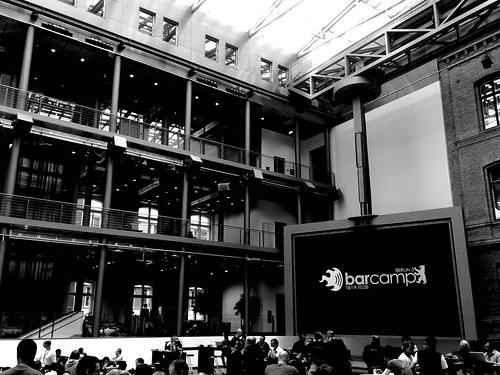 Barcamp Barcamp Berlin 3 was only my second Barcamp, but sure not the last one. It was huge (some 600 attendees per day), so I guess not everybody got to contribute, and in the Deutsche Telekom Berlin HQ, which doesn’t exactly seem a natural match. Traditionally, DT and bloggers aren’t exactly on the best terms. So this might actually be the real historical legacy of this Barcamp: It became clear that both sides actually can get together to organize kick-ass stuff. While during the first hours or so the blogger crowd and the on-site security and staff seemed to give each other suspicious looks, by the end of the first day everybody got along great. Respect to the DT techies and community guys to blend into the crowds. That’s no easy feat (what with German bloggers being traditionally very critical and outspoken) and it worked a charm. (By the way, wireless held up, despite basically everybody running at least one mobile device. Need to say more?) The location worked fine, despite some minor sound problems: Some of the workshop rooms were divided by dividers rather than walls, so you could regularly hear the neighbor session. Oh well, if that’s the only problem! 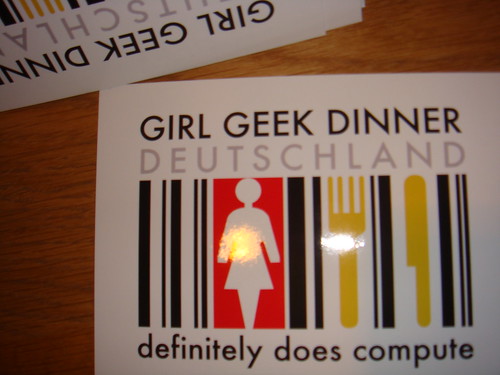 Girl Geek Dinner Nicole and Michelle were kind enough to invite me to my first Girl Geek Dinner (short: GGD). (Thanks!) Even though Nicole stressed that the event is neither just for girls, nor just for geeks, nor does it include dinner, it was great being there. What a difference it makes to have a web event with more than 50% women! Also, it’s fun to have to be invited: Guys may not enter without an explicit invitation by one of the female attendees. It seems like there should be more girl geek events, which is also what was discussed in a Web 2.0 Expo workshop on gender in Web 2.0 careers (I liveblogged). If you’re female and work in the web industry, do organize meetups. If you’re male, do encourage your girl friends and colleagues to overcome to attend web events, even if it can easily seem intimidating for the first time. 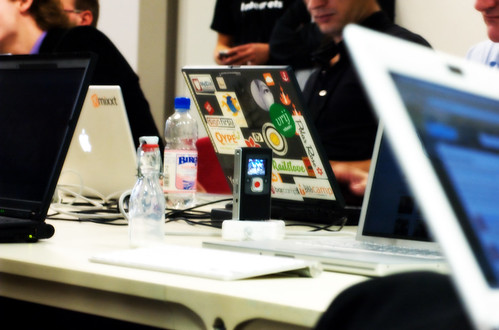 Web 2.0 Expo Most surprising was Web 2.0 Expo Berlin. I said before that I enjoyed last year’s Berlin web season around W2E, but many, many others disagreed. (Disclosure: I was there on a media pass, both years, so I was very well off there and got great support.) The main points of criticism were: Location (ICC sucked), catering (somewhat meager), attitude (seemed arrogantly organized), atmosphere (seemed like a replay).

So what was the surprise? To be honest, basically everything. It was great, from beginning to end. Except for really minor mishaps (at some point, free coffee was limited, which was fixed right away; at peak times wireless was slow) everything worked perfectly fine. The location great (BCC at Alexanderplatz, right in the heart of the city), it was small and cozy and had a kind of 60s retro charm that’s hard to describe, but really works. The food was yummy. The atmosphere was intimate and familiar. But the point that I’d like to stress most is the different attitude O’Reilly and TechWeb showed.

To take the kind of flak these guys got last year (and that was frankly quite often really low and unfair) and be open and good-spirited about it takes some (for lack of a better term) balls. The O’Reilly and TechWeb crew around Janetti Chon, Jen Pahlka and Brady Forrest was great. The blogger outreach program was a huge success. When the Berlinblase crew and I were liveblogging a keynote session and mentioned some wifi problems Jen was on the spot within mere minutes trying to see what she could do to fix everything. I almost felt bad for demanding such amounts of attention from those folks. But it’s something the blogger community here appreciated highly. Allow me to quote Johannes Kleske’s thoughts on Berlinblase:

What a difference a year makes. Following the communication of Techweb and Oâ€™Reilly in the last weeks you could really hear them making a huge effort of doing it right this time. I mean they could have easily said “Screw you, guys, weâ€™re going to another city where people actually appreciate what weâ€™re doing.” But instead they came back and asked for a second chance. And this time they are not bringing us “the gospel of Web 2.0” but are doing a lot to empower the European web community.

All that just to say: Thanks, and we’d love to have you back next year. Srsly, dudes ;)

Which brings me to my last point: Berlinblase.

Berlinblase Exactly one year ago, at Barcamp Berlin 2 and Web 2.0 Expo Berlin 07, Berlinblase was born as a tumblog and content mashup that aggregated everything related to the conference. Ever since, the project has been bubbling on low hear, so to speak. (Apologies for the puns that don’t really translate: “blase” means “bubble”.) For this year’s Barcamp and Web 2.0 Expo, we re-activated Berlinblase, relaunched the website, and got organized. We really wanted to cover the events up close, from the inside and on peer-level with the community. For all those who were there and wanted to have one central location for the coverage, and for those who couldn’t be in town. So we mashed up tweets, videos, blogs (both regulars and live ones), photos – you name it, we got it.

We did this for fun and out of passion, but the feedback we got was overwhelming – both in quantity and quality. (Thanks, everybody!) So many folks approached me over those few days with kind words, project ideas and invites to other conferences that we really didn’t know what to say. (Again: thanks!) We don’t know where this is headed, but it’s been a great ride so far. We started this more or less for fun, but it seems like there is quite some demand for on-site, insider coverage. Get in touch ;)

Also, it’s time for some really warm and fuzzy thanks and hugs: Nicole Simon was deeply involved in all of this: Barcamp, GirlGeekDinner, Web2Expo, you name it. Without Nicole, it seems, a lot of this wouldn’t have happened the way it did. Tobetop and Kai Uhlemeyer, who rocked the Barcamp. (You guys deserve some extra sleep, that’s for sure!) The same goes for Nicole Ebber, Picki, and the rest of the Barcamp orga team. Jen Pahlka of Techweb, Brady Forrest or O’Reilly and Janetti Chon, who did an awesome job at Web 2.0 Expo. Not only did everything work out extremely well, it was great fun to work with you guys, too. Stephanie Booth, you were great. (And sorry for the lack of soup!) Thanks Maureen Jennings of O’Reilly for the great press support, it was a pleasure. Also, thanks to all of you who agreed to sit down with me, or Berlinblase, or the Blogpiloten crew for interviews.

All of you guys did an amazing job. Thanks, a lot! Hope to see you soon, on one continent or another.