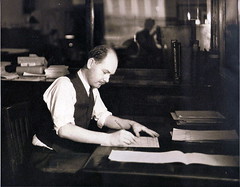 Steve Yelvington helps newspapers get the web. Newspapers have a hard time adapting the new ways of the web, what with all this user-generated content, changing consumer habits and dropping sales. It’s a huge cultural problem – traditional vs new vs social media – too. (And it’s not that newspapers, their editors or their management are stupid. Of course they aren’t. Still, they struggling.)

Working with Morris DigitalWorks, Steve is working on a next-generation news site management system. Quite a claim to fame, but both his track record and the few details he already shares back it up. So what’s different here?

We’re integrating a lot more social-networking functionality, which we think is an important tool for addressing the “low frequency” problem that most news sites face. We’re going to be aggressive aggregators, pulling in RSS feeds from every community resource we can find, and giving our users the ability to vote the results up/down. We’ll link heavily to all the sources, including “competitors.” Ranking/rating, commenting, and RSS feeds will be ubiquitous. Users of Twitter, Pownce and Friendfeed will be able to follow topics of interest. We’re also experimenting with collaborative filtering, something I’ve been interested in since I met the developers of GroupLens in the mid-1990s. It’s how Amazon offers you books and products that interest you: People whose behavior is the most like yours have looked at/bought/recommended this other thing.

That’s music in my ears. The whole thing is based on Drupal, which has always been strong on community features. Here, it seems, the whole platform will be aimed at creating mashups, drawing in RSS feeds, pushing them around and spitting them out. In the end, you should end up with a pretty lively site full of both professionally produced and user-generated content and commentary. Of course, by providing both input and output channels for RSS feeds, the data isn’t restricted to just the website, it lives on beyond, way in the cloud.

And the best thing: Usability-wise it’ll be aimed not at techies, but at editors. No major coding necessary:

Open tools and open platforms are great for developers, but what we really want to do is place this kind of power directly in the hands of content producers. They won’t have to know a programming language, or how databases work, or even HTML to create special presentations based on database queries. Need a new XML feed? Point and click.

That’s great news, and certainly a project to watch closely. Can’t wait to see the launch. October it is.

Note: So far, the CMS code hasn’t been released under a GPL, but they’ve pledged to do so. All in good time.