I haven’t been following up the U.S. online election campaigns closely enough. Just had a quick glance at some of the candidates’ websites. From what I’ve checked (mostly the Democrats) so far, I have to say I’m amazed: Those candidates’ websites all look practically the same, from the general structure to a near-identical intro screen aiming at volunteer recruitment: 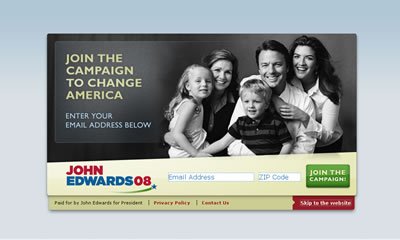 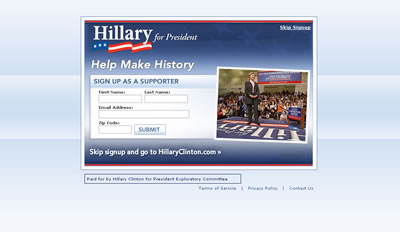 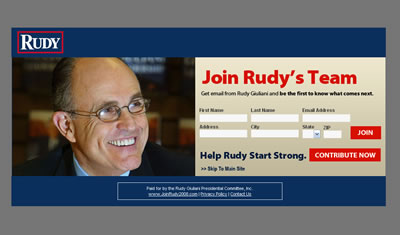 Note that all these screen have a really wide border: They’re all fit to a screen resolution of 800×600: A lot less than most of us (who work in front of their pc screens all day) would be using. But as a campaigner, you obviously don’t want to exclude any potential voter just ’cause they can’t afford a big computer screen, right?

(Funny, though, that this only goes for the intro screen that asks people to volunteer: “Hey, you won’t be able to really see any of our actual real content on the website because your screen is too small. But that shouldn’t stop you from spending your spare time on campaigning for us, right?”)

Of the four candidates I’ve checked out, Barack Obama seemed to be the only one without one of these practically interchangeable intro screens. So let’s go one step deeper and see the real website beneath the splash screen: 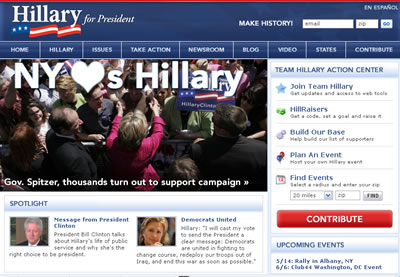 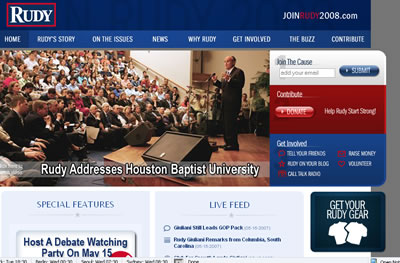 As I said, I haven’t checked out the other candidates, and I’ve hardly done any more than the most superficial poking at all so far, hardly scratching the surface. But so far, I have to say, it looks like the candidates are cloning each others’ efforts.

As in 2004, when blogs became red-hot, communitiy-building seems to be the strategy of choice: The tools have come a long way than the relatively rough blogs of 04, but the basic set of community-based efforts are similar everywhere: awareness (tell-your-friend), weblogs, fundraising, volunteering, and action coordination (events).

Which I guess is fine – but hopefully we’ll see some more, and particularly more innovative campaign ideas.

John Edwards, for example, has endorsed Twitter with an Edwards Twitter profile early on, and it’s taken care of very well. (Barack Obama has one too, although I don’t know since when. There are also Twitter accounts going by the name of Hillary Clinton and Rudy Giuliani, but so far they’re just dummies. Jaiku hasn’t hit the campaign circus yet, it seems…)