I just love how quickly and creatively the issue around “09 F9 …” has spawned a bunch of cool art. As you can imagine, I’m a huge fan of art, especially of mash-ups and politically inspired art. So to me, it’s just great to watch the creativity unfold here.

We’ve got the hamster poem (Source of this version unknown, but the original hamster can be traced back to Seattle Roll): 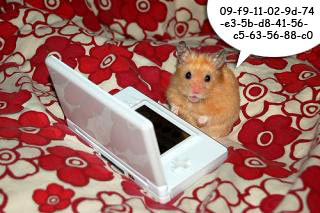 (via Xeni. Check out the comments there, too!)

Then there’s the even more awesome sloth. (Sorry, source unknown, too. If you know, share with me in the comment, please.) 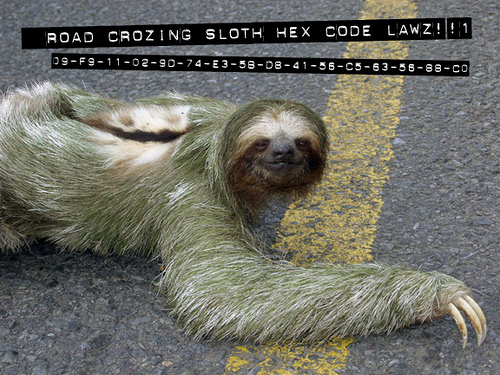 And there’s more popping up by the minute. Also, I noticed this odd number popping up in a few friends’ email signatures, and even saw a banner ad asking people to print it on apparel. Odd things are happening in the wide, wide internets.

Last, I saw this awesome little piece of poetry titled “Zero and her Origin“

Zero, the number said to be discovered Nine times by ancient magicians, was Found again by a mysterious order of Nine modern alchemists, who built One machine after another, until finally One exploded with fascinating results.

Update: EFF lawyer Fred von Lohmann has posted a great post explaining the legal issues arising from even openly discussing those digits. I’m not even sure the DMCA would be applicable to this weblog as it’s written and hosted outside the U.S., but as I deeply, deeply mistrust the AACS-LA (the entity that licenses AACS to makers of HD-DVD players) and their lawyers, I’d rather not quote the whole series of digits. What a crappy law, protecting a technology which is itself a crappy idea. Talk about chilling effects!