In case you’re in Berlin and haven’t made any plans this weekend (and even if you have), don’t miss out on Wizards of OS 4. It’s the conference on free knowledge, information freedom and open collaboration.

From Thursday until Saturday, there’s going to be pretty much non-stop program at Columbiahalle (Google Maps).

Among the speakers there will be top-notch people such as Lawrence Lessig (creative commons), Yochai Benkler (Wealth of Networks) and Larry Sanger (Wikipedia co-founder).

Here’s the weblog, and for those who can’t participate, there’s a live stream, too. 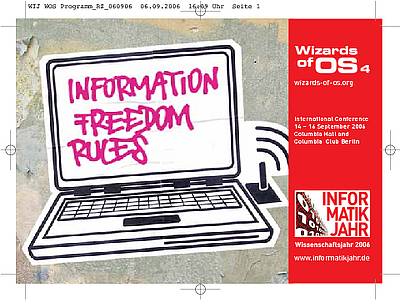