” Published in 1982, The Catalog of Cool was a guide to the best of timeless nonconformist music, TV, movies, books, clothes, art, leisure, and cars. Twenty-five years later, it’s even cooler” – that’s how Mark Frauenfelder describes The Catalog of Cool. I have to admit, I hadn’t heard of it before. (Then again, I was slightly too young at the time.) I’s pretty awesome, though. It is, basically, a hymn to the year 1962. Why 1962? Read on… 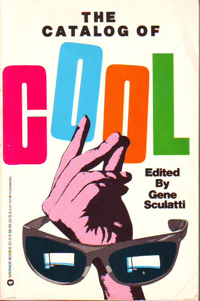 1962: The Last Good Year by Davin Seay …Nineteen sixty-two is gone forever. Goodbye and amen. So why ’62? Why not ’56 or ’68, or why not even ’23? Sixty-two seems, in retrospect, a year when the singular naivete of the spanking new decade was at its guileless height, with only the vaguest, most indistinct hints of the agonies and ecstasies to come marring the fresh-scrubbed, if slightly sallow complexion of the times. On the first day of that year, the Federal Reserve raised the maximum interest on savings accounts to 4 percent while “The Twist” was sweeping the nation. A month later “Duke of Earl” was topping the charts, and John Glenn was orbiting the good, green globe. That spring Wilt Chamberlain set the NBA record by scoring 100 points in a single game and West Side Story won the Oscar for Best Picture. The Seattle World’s Fair opened, followed five weeks later by the deployment of five thousand U.S. troops in Thailand. Dick Van Dyke and The Defenders won Emmys, and Adolph Eichman got his neck stretched. By that summer, the Supreme Court had banned prayer in public school, Algeria went indy, and Marilyn Monroe died of an overdose.

What’s more, Gene Sculatti – the book’s editor – has a website called…guess what: The Catalog of Cool.