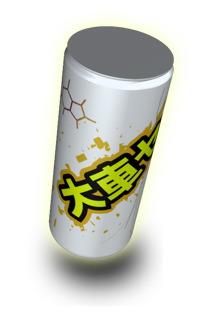 Many German TV producers try to avoid product placement in their shows. After all, most shows are just a means of selling ad time during the breaks. So if the actors drink Coke during the show, why should Pepsi buy ads? On the other hand, an in-show kitchen/bathroom/shop without any food/shower gel/magazines standing around in the background just wouldn’t look real. So what do you do?

You hire an ageny like Schein Berlin, a graphic design agency specialized in creating fake brands for product placement. They create entire product ranges for all kinds of fake brands from magazines to food, and even condoms and fake GDR files.

The Japanese energy drink above is a nice example of a cultural/lingo mishap when creating fake brands: It’s name supposedly translates into car dealer.